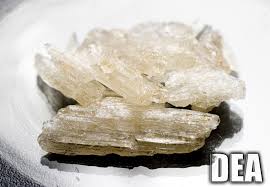 A massive police raid in Boshe Village in Lufeng City, Guangdong uncovered three tons of methamphetamine and resulted in the arrest of 182 people who were allegedly involved in 18 different drug rings, according to AP. The raid involved 3,000 police officers in helicopters and speedboats, but no injuries or deaths were reported:

Security forces surrounded and then entered the village of Boshe, where more than a fifth of the households were suspected to be involved in or linked to the production and trafficking of drugs, Guangdong province’s police force said on its website.

[…] “The offenders have for a long time been brazenly committing crimes, avoiding investigations and even ganging up to violently oppose law enforcement,” the statement said.

[…] Boshe’s villagers have resisted Chinese authorities for years, blockading the village entrance with motorcycles when word of a raid spread. The villagers would brandish replica AK-47s, lay nail boards on the road and hurl rocks and homemade grenades at officers, said the paper based in Guangzhou, the capital of Guangdong province.

The paper said police first captured the village party secretary who allegedly was protecting the drug operations from authorities. Other officials captured included the local police chief and other police officers. [Source]

The South China Morning Post has more details on the arrested officials:

The arrest of ringleader Cai Dongjia, who was also the village party chief, was a crucial victory in years of police operations against the village’s meth industry.

Cai used to be involved in making drugs, but has acted mostly as a protector for the gangs in recent years, and was suspected of embezzlement and bribing other officials, state media said.

Cai Hanwu, another local Party official suspected of involvement in the drug trade, was sleeping at home when arrested. Police found 350 kilograms of meth at his home. [Source]

According to Xinhua, Lufeng has provided one-third of the crystal meth nationwide in the past three years.
Read more about drug trafficking in China, via CDT.