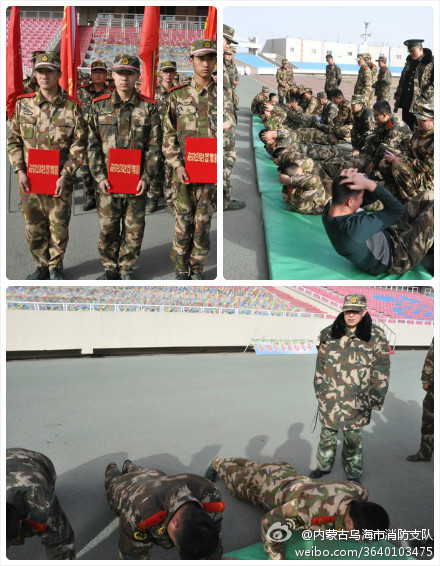 Central Propaganda Department: Regarding the discovery that new recruits were beaten by Wuda District Unit Two of the Wuhai City, Inner Mongolia Fire Department, the media must report the news only according to Xinhua News Agency wire copy. Do not independently investigate or comment on the matter. (January 6, 2014)

It is unclear when this directive was issued, but it concerns an incident from June 2012 which came to light on December 9. The Wuhai Fire Department posted a weibo [zh] about the incident on that day which received over 57,400 times–many of them angry:

At 10 a.m. on December 9, 2013, the Wuhai Fire Department received a notice from the municipal Public Security Bureau’s Public Sentiment Inspection and Control Department that they had discovered videos on Tencent under the title “Wuda District Unit Two of Wuhai City Fire Department Beats New Recruits.” The fire department quickly verified the circumstances depicted in the videos. We determined that the location shown in the videos was indeed Wuda District Unit Two and that the persons concerned are members of the unit.

From our initial understanding and investigation, this incident occurred in June 2012. That this happened is thoroughly reprehensible, and its effects are truly vile. We are deeply shocked and distressed at the revelation of such serious problems in fire department management and feel a great sense of responsibility. We wish to extend our sincerest apologies to all elements of society and to the firefighters who were victimized. The department has already formed a working group which is conducting a thorough investigation. All departmental and unit personnel implicated in the incident have been suspended from their duties and are undergoing investigation. Once the results of these investigations are clear, those responsible for and present at the incident will be dealt with strictly, in accordance with the law and disciplinary codes. Concerned persons which have already left the unit will be referred to the public security office to be investigated and dealt with. Concerned persons who have not yet left the unit and are still in active service will be strictly dealt with, in accordance with departmental regulatory clauses and the relevant laws and regulations. Those who have broken the law will be transferred to public security to be dealt with.