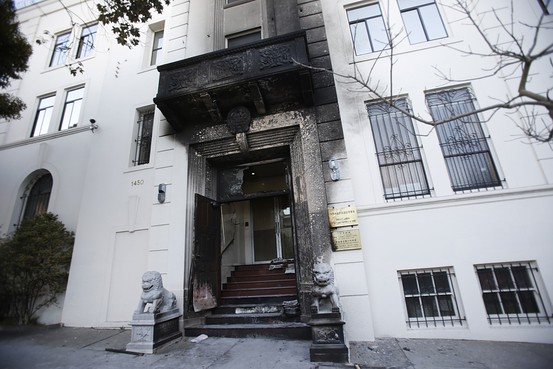 The Associated Press reports that the man arrested for an arson attack on the Chinese consulate in San Francisco last week is a Chinese-born U.S. permanent resident who says he started the fire after hearing voices:

Yan Feng, 39, of Daly City told investigators he unsuccessfully tried to use his passport to ignite gasoline he had poured on the consulate door and steps, an FBI affidavit said.

[…] Mr. Johnson said the investigation into the alleged motive is continuing but the FBI believes that terrorism, politics or civil rights weren’t involved. “Right now, we’re looking at this as purely a criminal matter,” he said.

[…] FBI agent Michael P. Eldridge said in an affidavit that, after being advised of his right to remain silent, Mr. Feng told agents “he targeted the Chinese Consulate because all the voices he had been hearing were in Chinese, and the Chinese Consulate had to have been involved.” There was no further explanation in the document. [Source]

After the FBI’s announcement, the consulate “urged the United States to punish the culprit, take effective measures to protect its diplomatic institutions and staff, and prevent the recurrence of similar incidents,” Xinhua said. Its report was silent on the voices.

“I’m speechless,” said one poster on Sina Weibo. “I can’t believe this was actually done by a Chinese national.”

“What the American government is suggesting is that this is a Chinese internal conflict and has nothing to with them,” said another poster.

Naturally — this being the Internet — some saw conspiracy, while others speculated on his motive. Still, many wondered why the instigator didn’t pick another target. “Set the same fire at the Japanese consulate and he would have been considered a hero,” groused one online poster. [Source]