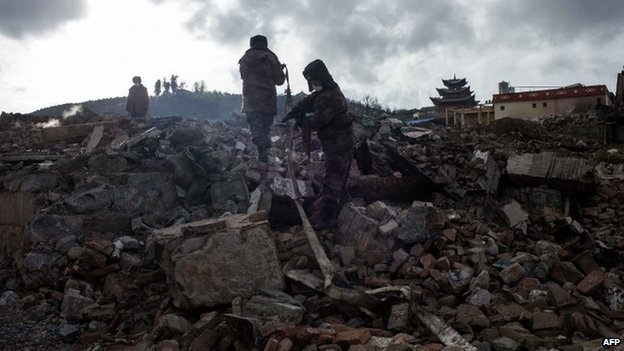 Saturday’s fire in the ‘Shangri-la’ town of Dukezong, Yunnan is said to have started with an electrical fault that ignited a curtain at an inn. As the flames were fanned by strong winds, efforts to fight them were slowed by a non-functioning fire control system, the AP reports:

The system in Dukezong had been shut down to prevent pipes from bursting in the below-freezing temperatures, the Deqen prefecture fire brigade said on its microblog. The service said the system was installed in 2011 at a cost of 8 million yuan ($1.45 million).

In addition to the system’s failure, the freezing temperatures lowered water pressure in hydrants when the fire broke out at about 1.30am Saturday. The wooden houses burned quickly, while fire trucks were unable to penetrate narrow streets and alleys.

[…] The fire raged for nearly 10 hours and destroyed 242 structures. About 2600 people were left homeless, although no casualties were reported. The blaze started in a guesthouse and has been ruled accidental. [Source]

A local fire captain told Xinhua that the pipes were particularly vulnerable to freezing because they were installed above ground to protect the town’s “historic character” from extensive excavation. According to travel writer Chris Taylor, however, much of this historic character was an illusion.