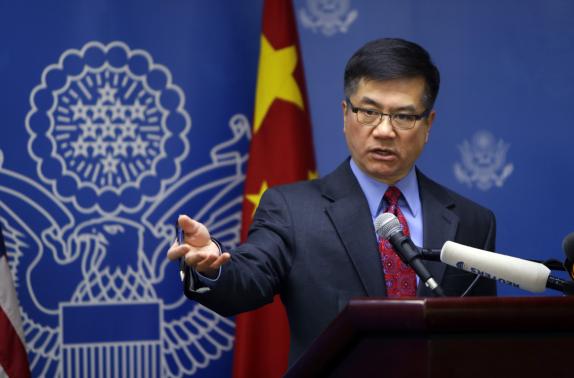 Reuters reports on outgoing U.S. Ambassador to China Gary Locke’s farewell speech, delivered to a group of Chinese students at a U.S. cultural center in Beijing:

China’s future development will hinge on a neutral judiciary and freedom of speech, U.S. Ambassador Gary Locke said on Wednesday in his final speech as envoy to Beijing, focusing heavily on human rights.

[…] Locke restated U.S. concerns over a spate of arrests and prosecutions of reform activists, but mentioned no specific cases.

[…] Locke also called for “more equitable treatment” of foreign journalists, who face difficulties, such as visa delays and harassment, when covering issues like human rights trials.

“As a permanent member of the U.N. Security Council that has hosted the Olympics and sent a spacecraft to the moon, China should have the national self-confidence to withstand the media scrutiny that most of the world takes for granted,” Locke said. [Source]

Mr. Locke will be leaving Beijing on Saturday, and former Montana Senator Max Baucus will assume the post. Mr. Locke has served as the U.S. Ambassador since August of 2011, and made promises to press China on human rights during his Senate nomination hearing. His farewell speech in Beijing comes one day after formal charges were levied against Uyghur scholar Ilham Tohti for separatism, and one month after civil society activist Xu Zhiyong was sentenced to four years in prison. Chinese civil rights icon Chen Guangcheng’s escape from house arrest and refuge at the U.S. Embassy became a defining moment in Mr. Locke’s early ambassadorship.

A Washington Post blogpost on Locke’s speech cites the ambassador’s popular appeal with the Chinese public and his persistent focus on human rights as the sources of friction between him and the Chinese government:

[…M]ore than anything, it was Locke’s persistent hammering over human rights that really got the commies riled up, especially his direct involvement in the case of blind human-rights activist Chen Guangcheng, who was given refuge in the United States and later ended up in New York.

When we asked Locke a while back why his relations with Beijing were at times a bit unpleasant, he indicated it was because they think he’s trying to undermine the government. And when his car was surrounded briefly by “demonstrators” as he tried to get into the embassy, couldn’t blame anyone who thought maybe it was a signal. [Source]