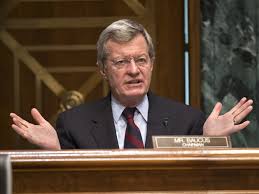 Senator Max Baucus, who promised in confirmation hearings “to engage China with eyes wide open,” has been confirmed as the next ambassador to China. From AP:

Senators gave final approval to the nomination of the moderate Baucus, D-Mont., by a 96-0 margin. Baucus, trim and youthful looking for his 72 years, accepted colleagues’ congratulations before and during the roll call.

Chairman of the Senate Finance Committee, Baucus has worked with Republicans during his 35 years in the Senate on issues ranging from taxes to health care reform — an independent streak that at times has vexed his Democratic colleagues.

[…] “His passion is well-known to all of us, his decades of experience here in congress. He’s an excellent choice that President Obama made to represent America’s interests in China,” said Senate Majority Leader Harry Reid, D-Nev.

In 2001, Baucus championed China’s inclusion in the World Trade Organization, which governs trade rules between nations, helping Beijing conduct business with other countries. He has sponsored legislation — not enacted — punishing China for undervaluing its currency and has criticized Beijing for blocking U.S. imports of beef, a big business in his Western state. [Source]

Politico looks at the challenges confronting Baucus as he takes over from outgoing Ambassador Gary Locke:

Baucus, who has traveled to China eight times since being elected to the Senate in 1978, faces a number of challenges in his new post in addition to the bad air in Beijing.

Final trade data for 2013 shows the U.S. trade deficit with China hit a record high at $318.4 billion, even as the overall U.S. trade deficit sank. The persistent trade gap has fueled calls for tougher tactics to deal with Chinese currency practices and market access barriers that put American firms at a disadvantage.

“I can think of few more able or more qualified, at this important moment in history, than our friend and colleague, the senator from Montana, to help provide advice and guidance to the president and to Congress about how to get that relationship right,” Senate Foreign Relations Chairman Robert Menendez said (D-N.J.). “He is an expert on trade issues and understands what we face in the coming years in terms of China becoming the world’s largest economy, and that all of us need to embrace that fact.”
At his confirmation hearing, Baucus said he would try to strengthen the economic relations by concluding a bilateral investment treaty and reaching an agreement on behavior in cyberspace, including putting a stop to Chinese government-sponsored theft of intellectual property. [Source]