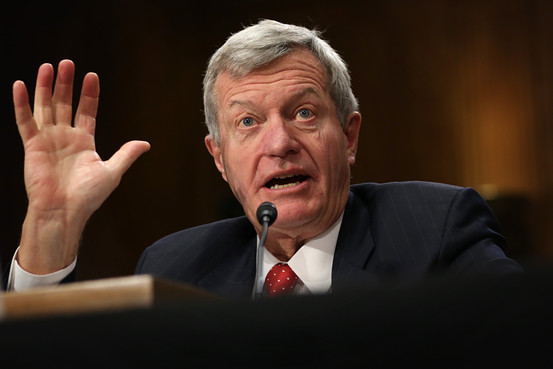 “Protection of human rights is probably the bedrock, fundamental goal,” Mr. Baucus told the committee, which is expected to vote on his nomination next Tuesday.

[…] The most pointed questioning came from Sen. John McCain (R., Ariz.), who expressed concern about comments from Mr. Baucus that he wanted to embrace “constructive engagement” in his relations with China.

“The role China is playing in Asia today should be of great concern to all of us,” Mr. McCain told the nominee, who warned Mr. Baucus that he would have problems representing American interests if he didn’t recognize the threat that China poses to global peace and security.

“I don’t disagree with you,” Mr. Baucus replied. “The overarching goal is for us as a country, I think, is to engage China with eyes wide open, to try to find common ground.” [Source]

Baucus’ initial testimony touched on issues including trade, security and cybersecurity, climate change, freedom of speech and information, Taiwan, Tibet and Xinjiang, as well as outlining his general approach.

The U.S.-China relationship is one of the most important bilateral relationships in the world. It will shape global affairs for generations to come. We must get it right.

[…] If confirmed, I hope to accomplish two overarching goals that are critical to our relationship with China and can help achieve our shared interest in a safer, more prosperous world.

• First, to develop our economic relationship with China in a way that benefits American businesses and workers.

• Second, to partner with China as it emerges as a global power and encourage it to act responsibly in resolving international disputes, respecting human rights, and protecting the environment.

When I visited China in 2010, I met with President Xi Jinping, who was then the vice-president. We discussed a range of topics, including China’s currency policies, its enforcement of intellectual property rights, and its barriers to U.S. exports. I remember President Xi stressing that the United States and China have more common interests than differences. In his words, cooperation between our nations could help drive peace and stability. He used that word – cooperation – repeatedly.

Leaders from both sides have recognized that we have much more to gain from cooperation than from conflict. I believe that as well, and I see many areas of our relationship where cooperation is not only possible, but vital.

[…] As the United States encourages cooperation with China, we must also remain loyal to the values that define us as Americans, including our commitment to universal values, human rights, and freedom. [Source]

With what an aide described as typical Montanan humility, Baucus conceded that “I’m no real expert on China.” Still, his knowledge and experience appear deeper than that of some others among the current batch of ambassadorial nominees. See more on Baucus’ qualifications and American and Chinese reactions to his nomination via CDT, or watch the nomination hearing at C-SPAN.