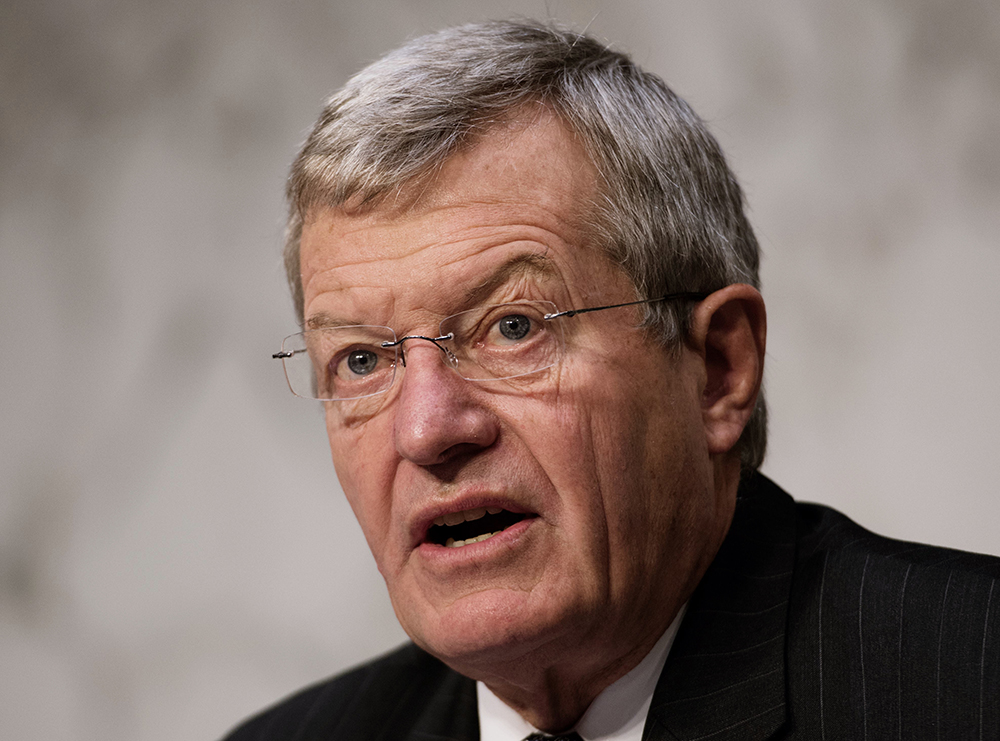 News came on Wednesday of Max Baucus’ selection—pending senate approval—to succeed departing U.S. ambassador to China Gary Locke. Max Fisher argued at The Washington Post and on Twitter that the Montana senator is a strange choice for the role amid tensions in the South and East China Seas and over treatment of American and other foreign media organizations.

Baucus is not an obvious choice. He is not completely new to China; he’s traveled there to promote trade, something he’s advocated since at least the mid-1990s. But there’s little on his resume that screams “China,” which is unusual both in that there are lots of more obviously qualified candidates and that most U.S. ambassadors to Beijing have had significant ties to the country.

[…] All that said, it’s entirely possible that Baucus has quietly developed many brilliant ideas for U.S.-China relations that the White House feels outweigh his other shortcomings for the post. And maybe that’s true. But it’s difficult to ignore that would seem to be the simplest explanation, which is that perhaps the Obama administration is just not as fussed about building close ties to the Chinese government and people as it has been previously. But there is at least one long-running problem Baucus could help solve: as China-watcher Damien Ma quipped, his arrival in Beijing “might give the Chinese a better understanding of how congress actually works.” [Source]

Foreign Policy’s Isaac Stone Fish suggested that this last point should not be taken too lightly:

Chinese leaders have always been more comfortable dealing with U.S. presidents — who have a job that’s roughly analogous to their own — than with members of Congress. “They don’t really know what to make of Congress, because it’s this cacophony of people with many of them influential on different things,” said Patrick Chovanec, chief strategist with Silvercrest Asset Management, who formerly taught economics at Tsinghua University in Beijing. Baucus, who’s been in the Senate for 35 years, could help smooth over concerns in Congress about Chinese investment in the United States and unfair trade practices against U.S. companies in China. “Having someone who understands that side of the U.S. government and is influential and has those connections,” is probably a good thing for the economic side of the relationship, Chovanec said. [Source]

Baucus might also bridge the gap in the opposite direction, according to former ambassador Jon Huntsman. Huntsman told Buzzfeed that the senator is “a very strong choice” who “hits the mark in a lot of critical areas” including suitably lofty political stature.

Huntsman also said he hoped Baucus would be able to use his ties to get Washington interested in China-related issues again.

“This is something that Max can do exceedingly well. He can reintroduce members of Congress to the most important relationship of the 21st century, ratcheting up interest in the whole subject area of China,” he said.

[…] In Congress, Huntsman said, “there’s a very sporadic level of interest in China. It generally heats up when there’s tension. But what we lack is a consistent interest — people who have a deep level of knowledge on these issues. This is something that Sen. Baucus will be able to bring some clarity to.” [Source]

In terms of specific China connections, former Mexican ambassador to China Jorge Guajardo argued on Twitter that none is strictly necessary:

“@mollyesque: Here's a question. Does Max Baucus have any connection to China?”/Answer: None needed to be good ambassador.

In any case, Slate’s Joshua Keating wrote that Baucus’ China record is more substantial than it might appear, and indicates hawkish leanings that make him “an interesting choice during a not-so-warm period of Sino-American relations.”

[… W]hile he’s not exactly a China hand, Baucus does have something of a track record on U.S.-Chinese relations over the 35 years he’s spent in congress. During the early 2000s he was chair (and is still a member) of the Congressional-Executive Commission on China, a group that’s generally extremely critical of China on human rights and economic policy.

He has recommended that the United States strongly advocate for human rights in China and urged President Bush during a 2002 visit to “urge Chinese authorities to perform a comprehensive review of those imprisoned for counterrevolutionary crimes, to release unconditionally all prisoners of conscience, to ratify the International Covenant on Civil and Political Rights, and to invite the U.N. Special Rapporteur on Religious Freedom to visit China.”

As Chairman of the Senate Finance Committee, he recently co-authored a letter accusing China of undervaluing “its currency, providing an unfair advantage to Chinese exporters and harming U.S. manufacturers and their workers”.  Ahead of WTO meetings in March 2012, he wrote. “China will not end its currency undervaluation unless the U.S. seizes opportunities like this to insist it does.” [Source]

A former aide told China Real Time on Thursday that Baucus’ longstanding “fascination” with China had sometimes gone too far:

As chairman of the Senate Finance Committee, Mr. Baucus has regularly kept a Mandarin speaker on staff, the aides say, sometimes relying on one-year fellows to supply what he saw as a necessary skill.

The country has held such an interest for him that at times Mr. Baucus has batted down staff recommendations that he put more time into other issues—like taxes or other countries—and insisted on focusing on China, according to a former Democratic staff director of the Senate Finance Committee.

“There were times when I said, Senator, I know you love China but we need to allocate appropriate time vis a vis the time you spend on China and trade issues versus what you spend on tax, health, welfare, debt limit—and he made his own decisions after hearing our arguments and one of the things that did not get scooted to the side was his focus on China,” said Russ Sullivan, who stepped down as staff director earlier this year. [Source]

The New York Times’ Jane Perlez suggested that the choice of a business- rather than security-focused candidate seemed quite deliberate:

Mr. Baucus’s interest in trade – and particularly in beef and wheat – between China and the United States makes him a palatable choice at a time when other significant issues, particularly the major power rivalry between Washington and Beijing in Asia, are complicating the relationship, Mr. Jin said.

[…] After the crackdown in Tiananmen Square in 1989, when relations between China and the United States almost went into the deep freeze, Mr. Baucus “worked to keep the trade element in U.S.-China relations,” said Douglas H. Paal, vice president of the Carnegie Endowment for International Peace in Washington. After that, Mr. Baucus played a role in the Senate in getting China admitted to the World Trade Organization in 2001, Mr. Paal said.

[…] Competition for the post was fierce among China hands in the United States. Two contenders at the front of the line were Stephen A. Orlins, the president of the National Committee on United States-China Relations, who speaks Chinese and has known the top ranks of government for many years, and Jeffrey A. Bader, who was senior director for Asian affairs on the National Security Council in President Obama’s first term. [Source]


The Washington Post’s Juliet Eilperin and Sean Sullivan found explanations for Baucus’ selection in domestic politics, arguing that it “(probably) increases the chances of Democrats holding onto his seat in 2014,” and “removes a credible critic of the Affordable Care Act.” Baucus was a key player in the healthcare law’s passage, but also warned that poor handling of it could risk “a huge train wreck.” See more on domestic angles at Politico.

As for Chinese reactions, The Financial Times quoted Diao Daming of the Institute of American Studies at the Chinese Academy of Social Sciences: “[Baucus] has a complicated attitude towards China – he was a very early supporter of granting China most favoured nation trading status but he was also one of several senators who raised pressure on China over currency manipulation [….] We need to be cautious and keep a watchful eye on him. He is a seasoned politician and will probably keep a low profile or at least not be as actively engaged in certain topics as Gary Locke was.” Renmin University China-U.S. relations specialist Jin Canrong told The New York Times, on the other hand, that “I don’t know him, I have no idea.”

On Thursday, Foreign Ministry spokeswoman Hua Chunying said simply that “no matter who will assume the post of U.S. ambassador to China, we hope that he will make positive efforts to enhance exchanges, mutual trust and cooperation.” Weibo users had other concerns, according to China Real Time’s Josh Chin:

“A venerable 72 and he wants to come to the Celestial Kingdom to breathe the poisoned cloud,” wrote one user of the Twitter-like Sina Weibo microblogging service. Another user was more direct: “So old! Don’t die in the Beijing smog!”

Still another user suggested Mr. Baucus should be known in Chinese as Ambassador Bao Kesi (包咳死). The last two characters, when combined, mean “cough to death.”

[…] Unlike the previous two U.S. envoys, Mr. Baucus has little personal connection to the world’s second-largest economy. (Jon Huntsman, Mr. Locke’s predecessor, speaks Mandarin and has an adopted daughter from China.) Some Internet users saw that as a positive, arguing that the Montanan would be a less confusing representative than Mr. Locke, who was accused by a few nationalists of betraying his motherland. [Source]