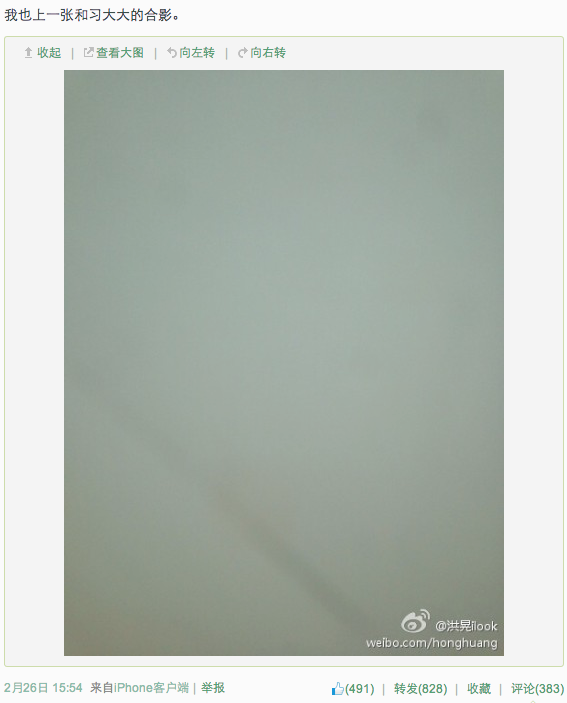 In late December, President Xi Jinping put his man-of-the-people disposition on display with a visit to one of Qingfeng Steamed Dumpling Shop‘s Beijing franchises, launching the fast food chain’s popularity skyward, allowing petitioners a high-profile venue to air their grievances, and prompting netizens to read deep into the President’s lunch choice. In an encore performance earlier this week, President Xi went out for a leisurely hutong stroll around Beijing’s trendy Nanluoguxiang. Reuters posted cell phone footage of alley residents hobnobbing with the President:

This time around, Xi rubbed elbows with the people during an exceptionally heavy bout of air pollution, and Xinhua’s coverage came under the headline “Xi Jinping Inspects Beijing’s Nanluoguxiang in the Smog: Breathing Together in Shared Destiny” (习近平雾霾中视察北京南锣鼓巷：同呼吸 共命运). Protective face masks have become vital accessories in the heavy smog, and coverage from the Washington Post translates netizen commentary on Xi’s choice to take his walk unprotected:

As the [Xinhua] story was posted to Weibo, commentators picked up on the lack of a mask, too. “It surely deserves a thumbs up, breathing smog together,” wrote a user named Maxuan. Another user named Pingping081 addressed Xi directly: “President Xi, we support you. Hope you take good care and making steady progress, lead us walk out of smog and receive a new era!” In general, the Weibo comments were largely positive (leading to some speculation that there may have been censorship involved), but one user wondered whether “big Xi” was setting a bad example by risking his own health. [Source]

In a comical post following Xi’s walk, Weibo user 段子坊 bragged of his luck and shared a photo.

段子坊: I didn’t run into Daddy Xi last time at the Qingfeng Steamed Bun Restaurant, but this time I was so lucky!!! To my great surprise, I happened to run into the old guy at Nanluogu Alley!!!!!! [going crazy] And the mayor of Beijing, Guo Jinlong, was there with him! I worked up enough courage to ask, and Big Boss Xi even took a picture with me!!!!!!! This is the luckiest moment of my life!!! Let me share the photo with you all!!

The post and accompanying photo were censored by Sina, but live on in the FreeWeibo archives:

洪晃ilook: I’m also uploading a photo of me with Daddy Xi.