Pushing for a Law Against Domestic Violence in China 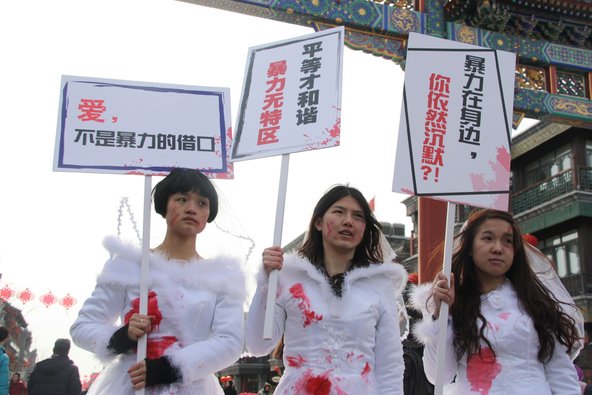 Currently, the Marriage Law and the Law on the Protection of the Rights and Interests of Women outlaw domestic violence, but they are vague, activists say. “There are too many systemic problems, too many loopholes. It’s just too easy to do it,” said Feng Yuan, a leading feminist and a founder of the Anti-Domestic Violence Network, which has campaigned for a comprehensive law for 15 years.

[…] In 2012, the National People’s Congress took proposals for a law defining and outlawing domestic violence into its legislative program. Every year, there have been a few deputies who try to push it forward. But after 15 years of lobbying, activists like Ms. Feng believe it’s still very low on the government’s agenda.

[…] Ms. Feng does not expect a law this year. Maybe next year, if things move fast, she said. And 2015 is the 20th anniversary of the United Nations’ Fourth World Conference on Women, a landmark event held in Beijing that declared: “Women’s rights are human rights.” [Source]

Tatlow’s report also includes an update on the case of Kim Lee, who won a landmark case against her abusive husband last year and wrote in The New York Times last month about the need for stronger laws.