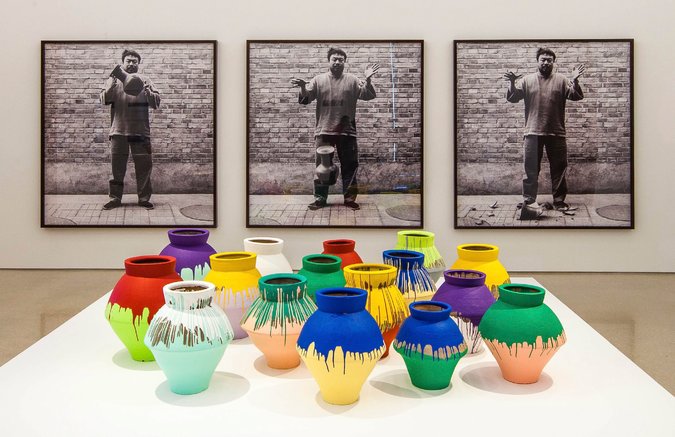 Video has surfaced of the destruction of a “million dollar” Han Dynasty urn that had been repainted by Ai Weiwei. The vase was smashed at the Perez Art Museum in Miami on Sunday by a local artist protesting museums’ focus on international stars. From The Telegraph:

“All of us here the museum are horrified by this criminal act. This is vandalism. We’re very upset,” said the museum spokeswoman, Leann Standish.

However, she added that the museum welcomed the “interesting dialogue” opened in response to Mr Caminero’s actions.

“The museum actually exists to foster a dialogue. We want that dialogue to be productive and not destructive,” she said. [Source]

Ai’s condemnation of the incident has raised some eyebrows given the destruction and defacement of antique urns in his work, with the argument that ownership makes a crucial difference widely rejected or overlooked. From, for example, The Guardian’s Jonathan Jones:

So – smashing art is interesting if an acclaimed global artist does it, and even if an art collector does it. But the guy who walks into a museum and smashes it is a vandal.

Could it be that smashing masterpieces is never interesting? That this illegal attack on art exposes the shallowness of the high end of contemporary art, where it’s cool to smash Han antiquities or doodle on Goya prints?

Ai Weiwei is courageous and eloquent but this incident and his response – for he has condemned the vandal – make me wonder about the rules of art right now. The reasons for condemning one destructive act and celebrating another don’t seem clear. Suddenly, the world’s most respected artist looks a bit conceptually fragile. [Source]

Meanwhile, The New York Times’ Nick Madigan—who previously noted that a group of nine similar Ai vases had sold in 2012 for a trifling $156,325—told Romenesko.com that the widely circulated $1 million value was “a blind, completely uninformed guess” by a police officer:

The museum director told me himself yesterday morning that the vase’s value had not yet been assessed for insurance purposes, and that since it had never been sold, there was no actual value placed on it or on the other 15 vases in the group.

The guy who did the damage, Maximo Caminero, whom I reached by phone after his release from custody, said he had heard the cop asking for the vase’s value, and when he didn’t get one, said, “Well, I’m just going to write a million to cover myself” — essentially confirming the museum director’s story. [Source]