Xi Jinping Vows to Turn China Into a ‘Cyberpower’ 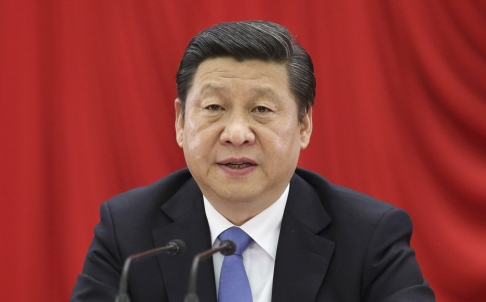 President Xi Jinping is presiding over a new working group on cybersecurity and information security, China announced on Thursday, a sign that the Communist Party views the issue as one of the country’s most pressing strategic concerns.

The government said Mr. Xi and two other senior leaders, Prime Minister Li Keqiang and Liu Yunshan, a member of the Politburo Standing Committee, would help draft national strategies and develop major policies in a field that might include protecting national secrets and developing digital defenses, among other goals.

“Efforts should be made to build our country into a cyberpower,” Mr. Xi said in a statement released after the first meeting of the group on Thursday, according to the official Xinhua News Agency.

The Washington Post outlines state media coverage of the new working group, which will focus on bolstering cybersecurity, the control of online public opinion, and technological innovation in China:

State-run CCTV outlined several goals of the group, including the drafting of a comprehensive national cybersecurity strategy and coordination of cybersecurity across sectors. According to CCTV, Xi tied the importance of government work on securing the Internet to long-term priorities, such as maintaining control over public opinion in China.

The state-run TV station said Xi sounded notes of alarm, saying China now lags behind in innovation and faces a widening digital gap between its rural and urban areas. He also noted that the average bandwidth available to most Chinese residents is lower than in many developed countries. [Source]

Overseen by Xi, Li, and Liu, the highest of high-level Party officials (the 1st, 2nd, and 5th most powerful members of the CCP, respectively), the group will be dealing with issues of major strategic concern. At Forbes, Adam Segal offers an explanation of how Internet technology and cybersecurity made it so high onto the policy agenda:

[…]First, there has been a growing chorus that China needed to better coordinate its Internet security policies. From the outside we tend to see the Chinese policy process as strategic and driven from the center, but in fact it is highly contested and fragmented. At least six different agencies and ministries–the Ministry of Public Security, State Encryption Bureau, State Secrets Bureau, Ministry of State Security, Ministry of Industry and Information Technology, and People’s Liberation Army–have input into cybersecurity policy. The announcement of the small group raises the issue much higher on the policy agenda, and energizes it with top leadership attention. It also means that stand-offs between competing groups can be resolved and policy moved forward.

Second, while the Snowden revelations really stalled U.S. efforts to pressure China on cyber economic espionage, the international environment is rapidly changing. Countries like Japan and Korea are developing new offensive and defensive cyber capabilities. Brazil is hosting an international conference on Internet governance and the European Commission has called for “concrete and actionable steps” to globalize essential Internet functions. Beijing is worried that it must do more to promote its vision to the outside world of how cyberspace should be managed.

Third, there are leadership politics involved. Xi Jinping has not been shy about consolidating power at the top. We will, of course, have to wait and see how the leading group develops. But this is another high profile issue Xi seems determined to put a stamp on as he tries to make China a ”strong network country.” [Source]

The group’s formation comes just over a year after information security firm Mandiant alleged Chinese state-sponsorship of hacking attacks against American media, government, and business organizations, and months after Edward Snowden’s leaks about American surveillance undermined U.S. high-ground and heightened Chinese concerns about its own cybersecurity. Meanwhile, Chinese tech companies have been facing hurdles in the U.S. due to security concerns, while foreign tech firms meet their own obstacles in China, and the Xi administration cracks down on free Internet expression.