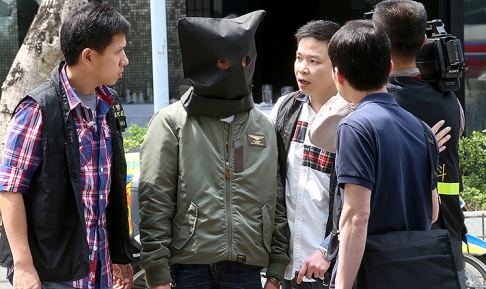 The two Hong Kong residents, both aged 37, will appear in Eastern Court in Sai Wan Ho on Thursday.

The two suspects were arrested in Dongguan, Guangdong province, after Hong Kong police sought help from mainland authorities about two weeks ago. Hong Kong police were informed about the arrests on March 9.

The pair were transferred to the city on Monday.

On Tuesday suspects were escorted under the watchful eyes of more than 100 police officers to seven locations across the city to help reconstruct the attack. [Source]

A total of 11 suspects, all Hong Kong residents, have been arrested in connection with the attack, and the other nine are currently out on bail. A separate report from the South China Morning Post cites a police source to note that the two suspects arrested on the Mainland may have been the two who assaulted Mr. Lau, and have been aiding the police in reconstructing the events of February 27:

Watched by more than 100 officers, the two men accused of being those hitmen were taken, hooded and chained, to seven locations across the city yesterday in a bid to reconstruct the crime.

Officers believe the pair, who are both aged 37 and are understood to be friends, stole a motorbike in Luen Wo Hui, Fanling, in the middle of last month, parked it in Devon Road, Kowloon Tong, and retrieved it on the morning of the attack, February 26.

After the man riding pillion was said to have leapt from the motorcycle to attack Lau with a meat cleaver in Tai Hong Street, Sai Wan Ho, the hitmen allegedly abandoned the bike nearby. […] [Source]

Just after the alleged attackers were charged, a separate attack on media professionals occurred in Hong Kong. From the Wall Street Journal:

Two executives at a soon-to-be launched Hong Kong newspaper were attacked by masked men wielding metal bars, the second assault on senior media figures in the city in less than a month.

Hong Kong police said the man and woman—both employees at the Hong Kong Morning News Media Group—were assaulted on Wednesday by four men at around 1 p.m. near Tsim Sha Tsui, a popular tourist area in Kowloon. The attackers quickly fled the scene.

The two victims were lightly injured, according to the police, who are seeking the four suspects. No arrests have been made so far, and no possible motives were provided.

The Hong Kong Journalists Association condemned the attack, saying Hong Kong upholds the rule of law and the city won’t tolerate any violent activity. The Hong Kong Morning News wished its two staff members a speedy recovery and said it was preparing for the paper’s launch. [Source]

This attack is probably quite different from newspaper editor’s assault. This rumoured to be pro-gov newspaper hasn’t even started printing.

More coverage from the South China Morning Post quotes a security official who believes that the attack is connected to the duo’s editorial work:

Deputy chairman of the Legislative Council security panel James To Kun-sun said there was reason to believe the pair were attacked because of their editorial work – and if so it would be another attack on press freedom.

“Does it mean that some people do not want to see the newspaper join the market?” he asked. “It is unlikely [they were assaulted] because of their own personal matters.” [Source]

Prior to the stabbing of Mr. Kevin Lau Chun-to last month, concerns over eroding press freedoms in the semi-autonomous region erupted into street protests, and further demonstrations were organized after the attack.