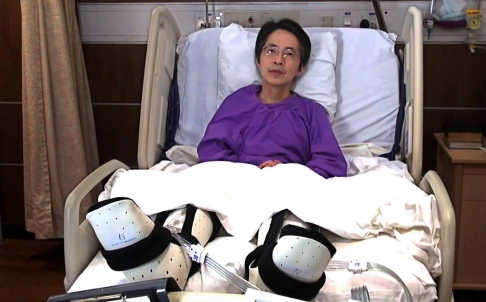 Police in Hong Kong and China have arrested nine men with suspected links to organised crime for the stabbing of a prominent Hong Kong journalist, the territory’s chief of police said on Wednesday, an attack that was seen by many as an assault on press freedom.

[…] Two men had been arrested in China, and seven in Hong Kong in connection with the attack on Kevin Lau, a former editor of the respected Ming Pao newspaper, who was seriously wounded.

“We suspect the assailants were hired and they have a triad background,” said Andy Tsang, Hong Kong’s commissioner of police, referring to Chinese organised criminal gangs.

All nine were Hong Kong residents. Tsang declined to give specific grounds for making the arrests, but said preliminary inquiries suggested the attacks had nothing to do with Lau’s journalistic work. [Source]

The Hong Kong Journalists Association is pleased to hear that the police have apprehended suspects related to the attack on Mr Kevin Lau, former Ming Pao Chief Editor.

The association is, however, surprised by the remarks made by the Commissioner of Police – at such an early stage of the investigation – that the information on hand shows no direct link between the attack and Mr Lau’s journalistic work.

The remarks risk in misleading the public into believing that the attack is for personal cause which the Commissioner has offered no explanation.

We await further details related to the incident and look forward to a full explanation of the incident from the police.   [Source]

During Lau’s tenure as Ming Pao’s chief editor, the newspaper was a reporting partner in the ICIJ project that revealed the offshore holdings of many Chinese elites. In January, Kevin Lau was removed from his post as Ming Pao’s chief editor to the protest of many of his colleagues. Just prior to the attack on Lau, thousands of Hong Kong residents gathered in protest of eroding press freedom in the semi-autonomous region, and more demonstrations occurred after the stabbing.

The South China Morning Post reports comments from the injured journalist’s hospital bed, where he stressed the importance of solving the case, and announced the establishment of a new interest group in his name:

Journalist Kevin Lau Chun-to yesterday urged the government to find his attackers quickly to restore journalists’ faith in the rule of law and allow them to work without fear.

[…] A video showing Lau speaking from his hospital bed was played at a press conference to announce the setting up of a concern group with a dozen of Lau’s former classmates at the law faculty of the University of Hong Kong as its core members.

“We urge the government to solve the case as soon as possible, so journalists will have confidence in the rule of law again and do not have to be afraid of the threat of violence anymore,” Lau said.

[…] He appealed to the public to support the group’s cause to say no to violence while upholding the rule of law and press freedom. [Source]

Also see The Guardian’s summary of Mr Lau’s recent writings describing his recovery and his belief that the attack was meant to take his life.