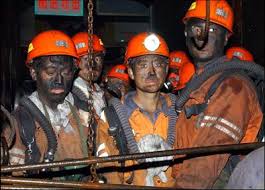 The world’s largest consumer of coal, China accounts for approximately half of world consumption. China reportedly sits on coal reserves that outweigh the country’s human population, and earlier this week experts said that demand can be expected to rise steadily until 2020. While coal has done much to meet the increasing energy demands that have accompanied China’s rapid economic growth, it has brought with it substantial human and environmental costs. A report from AFP profiles a Guizhou coal miner to personify China’s relationship with its primary energy source:

Forty years of digging for coal have left the miner with tuberculosis and drained his village water supply. But he, like China, clings to the resource as his economic mother lode.

“If I did farming, it would take me a year to get what I make in a month,” said the 55-year-old, surnamed Di and sporting the blackened fingernails of someone who has spent most of his days beneath the hills of China’s poverty-stricken Guizhou province.

His lungs “don’t hurt much”, he said, although in any case he cannot afford treatment.

China too has embraced the economic benefits of coal despite the threats it poses to health and the environment. […] [Source]

As public concerns about pollution have been rising after an exceptionally smoggy year, China recently declared “war on pollution“—in which a major battle will be focused on reducing coal-fired power. In his opening address at the National People’s Congress in Beijing earlier this week, Premier Li Keqiang pledged that “50,000 small coal-fired furnaces will be shut down this year and cleaning technologies, including desulphurization, denitrification and dust removal, will be introduced at coal-burning power plants.” At Quartz, Gwynn Guilford notes that while a coal fire phaseout would do much to clear up smog, switching to other energy sources would significantly increase China’s greenhouse gas output and water usage:

This [“war on pollution”] sounds like great news. But it also begs the question, with coal now providing 65% of China’s energy, where’s the cleaner energy that’s going to replace it coming from?

China doesn’t have enough natural gas to meet its energy needs, and its nuclear sector is also relatively small. Clean technologies such as wind and solar are still immature. That’s why a lot of the country’s energy will come from “coal natural gas,” a.k.a. synthetic natural gas or syngas. Created by burning natural gas developed from coal, this form of energy creates a fraction of the pollutants spewed out by coal-fired power plants. But it also emits up to 82% more carbon dioxide and guzzles huge amounts of water.

China emitted 9.9 billion tonnes of CO2 (pdf, p.10) in 2012, a 3.3% increase on the previous year; that increase came largely from coal-fired power plant production. That was an improvement from the 10% annual increase that China had averaged for the last decade or so. But imagine what will happen as China’s coal-fired power plants are swapped out for syngas, emitting 82% more CO2.

Also see “Sacrificing the Environment to Save the Coal Industry,” via CDT.