State Council Information Office: Follow Peaceful Beijing’s [Weibo] notice in reporting the incident of a man stabbing people in Beijing’s Huairou district. Do not hype the story or report on it without authorization. Interactive platforms must close commenting. (March 27, 2014) 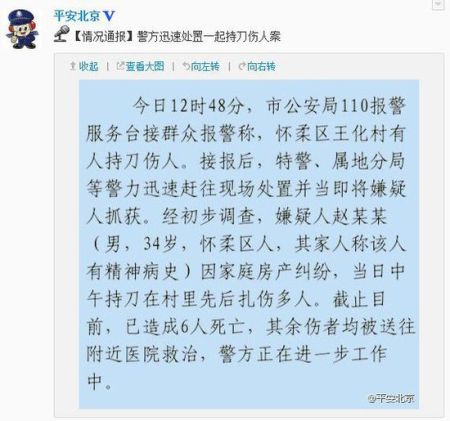 At 12:48 today, the city Public Security Bureau 110 service desk received a number of reports that someone in Wanghuacun, Huairou district was stabbing people. After the reports were received, SWAT and local police officers rushed to the scene and apprehended the suspect. An initial investigation indicates that the suspect, surnamed Zhao (male, 34, resident of Huairou; family states he has history of mental illness), was stabbing people with a knife in the neighborhood at midday because of a dispute over family property. At this point, six people have died. All of the injured are being treated at a local hospital. The police are taking the next step in their work [on the case].