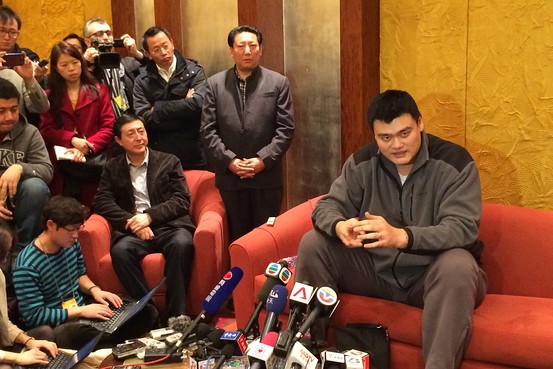 NBA basketball player turned Chinese People’s Political Consultative Conference delegate Yao Ming has become an advocate against growing obesity rates in China, but admits that even he has “gone a little soft around the edges recently.” From Laurie Burkitt at China Real Time:

Mr. Yao was speaking at a press briefing Thursday in his capacity as an advisor to the government, which is holding its annual parliamentary meetings this week in Beijing. The 7-foot-6 former Houston Rockets center has gained weight since his muscled days in the NBA, though he didn’t provide details on his current figure.

[…] Mr. Yao said an obstacle in China is that people lack time. Even if there are many exercise centers, little can be done to help people improve their fitness if they can’t commit time, he said. He added that he’d like to work with the government to create more programs and competitions for children, encouraging fitness as a hobby.

Mr. Yao, who retired in 2011, launched his own NBA Yao School in Beijing in October. It is an after-school basketball training and fitness school for young boys and girls. He said Thursday he hopes the program will help raise fitness levels.

“I think in the next 10 years, similar to the smog issue, obesity will influence the Chinese.” [Source]

At The Age, Philip Wen suggests that Yao Ming has become “a cog in China’s political machine,” along with other prominent delegates including Mo Yan, Chen Kaige and Jackie Chan:

[…] Increasingly, the Communist Party is embracing the country’s sporting and cultural icons and inviting them to sit as members of the Chinese People’s Political Consultative Conference, a largely symbolic advisory body which runs concurrently with the Congress.

[…] But is it just a gimmick to try and make the Communist Party more palatable to the average Chinese person, and put a friendlier face on politics?

“They’re meant to discuss politics but really it’s just an honour given to those who do well in different fields, including celebrities,” said Zhang Ming, a political science professor at Renmin University. “It just shows that China’s NPC and CPPCC are not actual institutions to participate in the administration and discussion of state affairs. It’s all controlled by the central party.” [Source]

Read more about obesity in China via CDT.