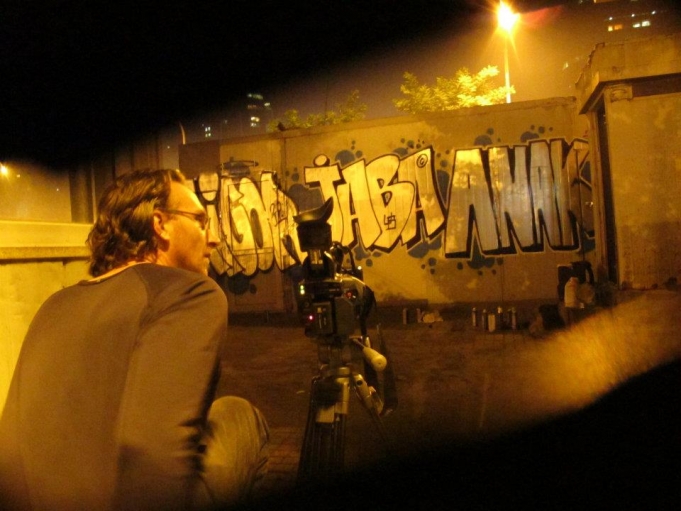 Texan Lance Crayon, in China since 2009, has produced a documentary film exploring the tiny street art scene in China, where graffiti is surprisingly “safe” and “open.”  Aly Thibault at PRI’s The World reports:

“It’s really a middle class and up endeavor, simply based on the money factor,” he says, “For a 19-year-old or even a 25-year-old to have something known as disposable income, that’s a pretty new thing in China. And you’ve got to ask yourself, do I want to spend 500 kuài — which is roughly $82 — on throwing up a piece that could easily be covered in a few days, or at some point.”

This leaves Beijing with only a small number of graffiti artists — no more than 25 by Crayon’s estimate.

For his film “Spray Paint Beijing: Graffiti in the Capital of China,” Crayon interviewed several graffiti artists about their work and lifestlye and even filmed them while they tag. He says taggers in Beijing often work in broad daylight and don’t usually run into any trouble with police.

“As long as you stay away from anything political or anything too sensitive, from painting on temples or anything sacred and government buildings, things like that, you’re not going to have a problem,” Crayon says. “And that’s what they do. I mean there is so much concrete in Beijing, that when these guys paint on walls that aren’t designated by the government, the citizens think they are making this city look prettier — and indeed they are.” [Source]