Maritime Dispute on Display in the Sea and at The Hague 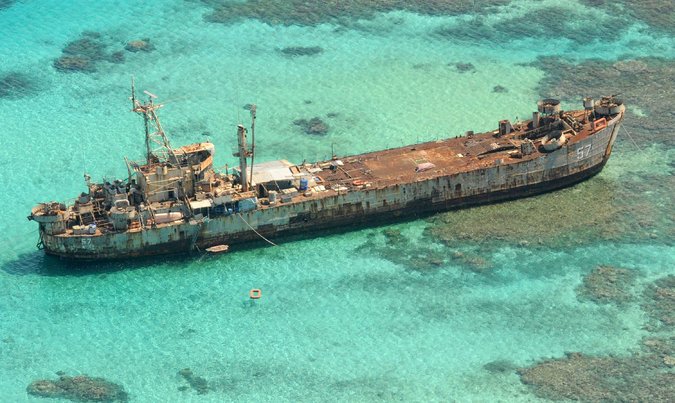 Just after the Philippines submitted an arbitration case to the United Nations in effort to resolve long-running territorial disputes with China in the South China Sea, a Philippine vessel managed to slip past the Chinese Coast Guard on Sunday to resupply the Sierra Madre, a stranded ship that has served as a Filipino outpost in the contested Spratly Islands for the last 15 years. The New York Times reports:

Chinese ships prevented the Philippines from resupplying the boat and its eight-man military crew in early March, but on Saturday a Philippine vessel manned by troops managed to keep the Chinese at bay by going into shallow waters and lifting food onto the stranded ship.

[…] “This is a political provocation,” the Chinese Ministry of Foreign Affairs spokesman, Hong Lei, said at a regular briefing on Monday, adding that the Philippines was “hyping” its “illegal occupation” by filing a case on Sunday with the Permanent Court of Arbitration in The Hague.

[…] The cat-and-mouse maneuvers between the Philippines, an American ally with little naval capacity, and China, which has a fast-expanding navy, have captured attention for what they might foretell about future rivalries in the South China Sea. [Source]

Reuters has a first-hand record of this most recent round of “shark and minnow” in the region, and provides details on the Sierra Madre—the stranded ship that has been beached on the Second Thomas Shoal since 1999:

The outpost is a huge, rusting World War Two transport vessel that the Philippine navy intentionally ran aground in 1999 to mark its claim to the reef.

There, around eight Filipino soldiers live for three months at a time in harsh conditions on a reef that Manila says is within its 200-nautical mile exclusive economic zone (EEZ). China, which claims 90 percent of the South China Sea, says the shoal is part of its territory. […] [Source]

A separate report from Reuters outlines the arbitration case Manila has submitted to the UN, and China’s threat that it has “seriously damaged” ties with Beijing:

China warned the Philippines on Tuesday that its arbitration case before the United Nations over a maritime dispute “seriously damaged bilateral relations” and called on Manila to return to negotiations.

The Philippines submitted the case, challenging China’s “nine-dash-line” that stretches deep into the South China Sea and the maritime heart of Southeast Asia, on Sunday.

“We find it very hard to understand these moves of the Philippines and we are deeply disturbed by and concerned with the consequences of such moves,” said Sun Xiangyang, charge d’Affaires of the Chinese embassy in Manila.

“What the Philippine side did seriously damaged bilateral relations with China.” […] [Source]

Meanwhile, the U.S. has condemned China’s failed attempt to block the Filipino mission to resupply the Sierra Madre. From AFP:

The United States has criticised Beijing for being provocative after a Chinese coastguard tried to block a Philippine vessel on Saturday that was rotating troops on a islet among the Spratlys archipelago in the tense South China Sea.

The attempted Chinese blockade, which led to a two-hour stand-off with the Philippine ship, is “a provocative and destabilising action,” State Department deputy spokeswoman Marie Harf told reporters.

Harf said that the Philippines had permission to resupply troops to the remote reef, the Second Thomas Shoal, because it has kept a naval presence there since before a 2002 declaration of conduct in the South China Sea.

[…] The United States has been warning China against taking more drastic action in the South China Sea after it declared an air defence identification zone in November over much of the East China Sea, including islands administered by Japan. [Source]

Also see video footage of the Second Thomas Shoal standoff from the BBC.