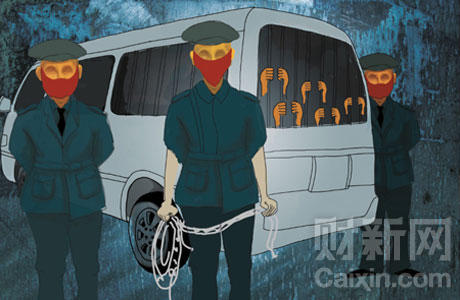 Caixin’s Ren Zhongyuan and Yang Baolu report on the trial this month of three alleged security guards at a black jail near Beijing, after petitioners gathered enough clues while held there to later determine its location. The illegal detention facility was reportedly one of six run by a husband and wife team, now on the run, who boasted of earning more than 20 million yuan (US$3.2 million) a year from the enterprise.

On December 15, 2012, 12 of the people who said they had been detained traveled to the offices of a newspaper in Beijing to tell their story. More than 20 security personnel from Heilongjiang tried to stop them, but the newspaper’s security guards stepped in so that a reporter could lead the 12 inside.

[…] A month later, Cui, the detainee who wrote down the repairman’s phone number, and six others followed all the evidence they had gathered to Duliu Village in Gua’an County, Hebei. They found the village house they were held in, and immediately filed a police report.

During the trial, the witnesses have repeatedly said they feel their detentions were a form of government action, and that local government officials should also be charged. However, the court has said that cannot happen until Liu, the fugitive accused of hiring the guards, is found. [Source]

Ten other people were imprisoned last year for wrongfully incarcerating petitioners at a black jail in Beijing, though in that case, too, the official who allegedly hired them appeared to have escaped prosecution. Beijing has repeatedly pledged greater protection of petitioners’ rights in recent months, but the general effectiveness of these calls remains in doubt.

Several lawyers were detained and allegedly tortured while investigating illegal detentions in Heilongjiang itself last month.