Lucrative Stardom Using a Webcam and a Voice 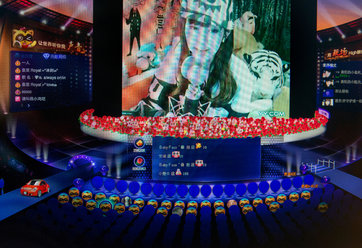 The shows are typically low-budget productions by amateur entertainers who work out of tiny apartments, fitted with webcams. And viewers spend large sums online to buy credits to give virtual gifts of roses, chocolates and Chanel bags to performers, who receive a slice of the revenue from Internet companies.

[…] The websites mix video feeds with streaming-text commentary from the audience. In the upper left corner of the screen is a running count of how many viewers are in the virtual concert hall. Digital cars — representing the V.I.P.s who spend large sums — speed in and out of the imaginary hall.

[…] The leader in China in this industry is a fast-growing start-up called YY.com. It has 92 million monthly active users and more than a million channels.

Beyond karaoke performances, YY.com also provides a platform for other types of entertainment as well as educational services. From Forbes:

YY provides large group voice and video sessions for a wide range of uses, such as concerts, education, fashion, sports and personal finance. There are often hundreds or up to tens of thousands of people participating in these sessions at the same time. Think of it as a kind of virtual stadium. One of the most popular uses of YY is for karaoke, where one person will sing while others follows along and chat with each other on text chat.

Remarkably, YY, can support more than 100,000 users at the same time on one of its channels. There are now about 11 million channels and YY hit a peak of 8.45 million concurrent users across its platform in December 2011. The company did 421 billion voice minutes in 2011, which Li believes is bigger than Skype was at the time. “YY has changed voice to take voice from just communication to also a form of entertainment or education,” Li says.

[…] There are also other uses of the service. One recent college graduate, for example, began teaching Photoshop skills in a virtual classroom on YY, which includes educational tools such as embeddable whiteboards, PowerPoint-like slides and videos. Users who create rooms can customize the look and feel, and also make the session public or private. The young man now makes a staggering amount of more than 1.2 million Yuan per month ($188,000), according to Li. The teacher currently doesn’t have to pay anything to YY. In the second half of this year, however, YY plans to add monetization for educational rooms or what it calls channels. [Source]

See also an earlier piece by The New Yorker on the rise of YY.com, via CDT.