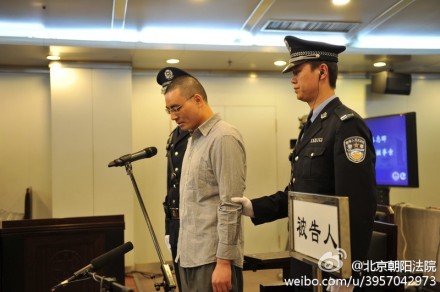 Qin Zhihui, 30, was accused of defamation and disturbing public order. Prosecutors said Qin used his weibo, or microblog, to claim the now-defunct Ministry of Railways in 2011 made a €30 million (HK$322 million) payout to the family of a foreign victim of a train crash in Wenzhou, while denying equal treatment to Chinese victims.

[…] “I don’t want to defend myself,” Qin said, according to the court’s live-blogging of the proceedings on its official weibo account. “I just want to say that I hope my experience is a lesson to other microbloggers.” [Source]

Xinhua reports that Qin had previously spread online rumors about celebrities and other public figures:

Qin Zhihui, known as “Qinhuohuo” in cyberspace, was accused of creating and spreading rumors about several celebrities including popular television hostess Yang Lan, as well as China’s former Ministry of Railways. He spread rumors via Sina Weibo, China’s Twitter-like service, from December 2012 to August 2013, according to prosecutors.

[…] “I just wanted people to see what I had posted and make netizens discuss them,” he told the court when asked by prosecutors why he spread the rumors.

He said he knew that his microblog posts would damage the reputation of their celebrity subjects.

“My acts were banned by law. Indeed, I misled the public about celebrities and government,” he said. “There is freedom on the Internet. I crossed the red line and severely damaged the reputation of others.” [Source]

China’s State Council Information Office has issued a censorship directive instructing websites to “control and clean up discussion of the ‘Qin Huohuo’ case.”