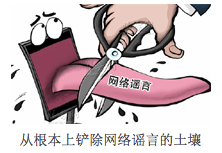 The trial of Qin Zhihui for “fabricating online rumors and harming others’ reputations”  began on April 11 in Beijing. Known by the online moniker “Qin Huohuo,” the 30-year-old microblogger was arrested in August, just as the government announced plans to “fundamentally eradicate Internet rumors”—part of ongoing efforts to regain control of online public opinion by cracking down on social media. In this first public trial since the crackdown began, Qin pleaded guilty to defaming the now-disbanded Ministry of Railways. The South China Morning Post quotes Qin: “I don’t want to defend myself. I just want to say I hope my experiences would be a lesson to other microbloggers – don’t make the same mistake.”