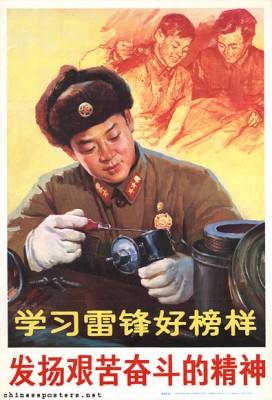 Chinese police have detained two Internet users for allegedly starting online rumors that tried to defame government groups and a cultural icon in the nation.

30-year-old Qin Zhihui and 40-year-old Yang Xiuyu both worked at a company “that deliberately fabricated rumors over the Internet,” China’s Ministry of Public Security said in a posting on Wednesday. The rumors were created as a way to drum up a greater online following and “illegally obtain benefits” for the two, the ministry added, without elaborating.

Both Qin and Yang have accounts listed on China’s Sina Weibo, a Twitter-like service with over 500 million users in the country. The two were arrested for allegedly posting comments defaming Lei Feng, a former soldier in China’s People’s Liberation Army, who has figured in propaganda campaigns in the country since his death in 1962. [Source]

At Tech In Asia, Charlie Custer notes the irony that lies in being charged for fabricating rumors about Lei Feng, a cultural hero whose legacy is largely a product of fabrication:

The users, who went by ‘Qin Huohuo’ and ‘Lima chai’er’ online, appear to have inspired an official response to their online endeavors when they mocked Lei Feng the Chinese propaganda hero who’s probably mostly made-up but still revered in China, at least by the government. Then, when investigating the men behind the online monikers, police discovered that their online promotions company was allegedly profiting illegally.

[…]To be frank, these guys sound like scumbags. But it’s hard not to wonder at the irony of Beijing accusing people of fabricating rumors about Lei Feng, a man whose life story is full of half-truths, exaggerations, and full-on fabrications perpetrated by — you guessed it — the same government that’s now arresting these Weibo users. If untrue online rumors about Lei Feng are harmful (and I agree that they are) shouldn’t the police also be investigating the people in the propaganda department? [Source]