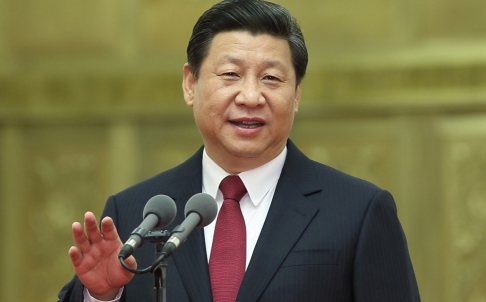 The Chinese government has released a book featuring quotations from President Xi Jinping in a move that is believed to be “an attempt to trumpet the success of China’s policies and raise the president’s profile.” Zhang Hong at South China Morning Post reports:

The unremarkably named Excerpts of Xi Jinping’s Remarks on Overall Deepening Reforms contains insights such as, “If you can contribute to ease air pollution and solve the problem of smog, you will be given honour and be a hero.”

Another excerpt reads: “We have to beware not to fall into the snare of division or Westernisation. We cannot… use the excuse of reform for our own interests.”

Analysts have said the book, edited by the Party Literature Office and published by the Central Party Literature Publishing House, is an attempt to provide guidelines to the nation while strengthening Xi’s image.

[…] The book has 12 sections and includes 274 quotes from Xi, taken from more than 70 speeches, written instructions and comments from the time he became the party’s general secretary on November 15, 2012, to April 1 this year. [Source]

Another, more renowned, compilation of a Chinese leader’s speeches is Mao Zedong’s Little Red Book. First published in 1964, the book gained widespread popularity during the Cultural Revolution. At New Statesman, John Gray looks at the recently published Mao’s Little Red Book: a Global History, a collection of essays in which scholars from around the world explore the various uses and forms of Mao’s Quotations and the historical impact that the text has made.

The editor of Mao’s Little Red Book writes in the preface that this is “the first scholarly effort to understand Quotations from Chairman Mao as a global historical phenomenon”. It is an accurate description, but the collection has the shortcomings that are to be expected in a book of essays by academic authors. The prose style is mostly stodgy and convoluted, and the contributors seem anxious to avoid anything that might smack of a negative attitude towards the ideas and events they describe. “As a group,” the editor continues, “we are diverse with respect to age, gender, ethnicity and political sympathies.” He is right that, judged by prevailing standards, it is a well-balanced group. All of the relevant disciplines are represented – history, area studies, literature, political science and sociology – and although ten of the 13 contributors teach in the US, the collection is representative of the range of views of China that you will find in universities in much of the world. However, the fact that it reflects the present state of academic opinion is also the book’s most important limitation.

Reading the essays brought together here, you would hardly realise that Mao was responsible for one of the biggest human catastrophes in recorded history. Launched by him in 1958, the Great Leap Forward cost upwards of 45 million human lives. “When there is not enough to eat, people starve to death,” Mao observed laconically. “It is better to let half of the people die so that the other half can eat their fill.” He did not specify how those condemned to perish would be made to accept their fate. Ensuing events provided the answer: mass executions and torture, beatings and sexual violence against women were an integral part of a politically induced famine that reduced sections of the population to eating roots, mud and insects, and others to cannibalism. When Mao ordered an end to the horrific experiment in 1961, it was in order to launch another. The Cultural Revolution was nothing like as costly in fatalities, but it left a trail of broken lives and cultural devastation, the memory of which is one of the chief sources of the post-Mao regime’s legitimacy. [Source]