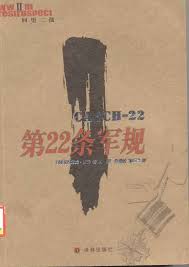 Catch-22, the title and starring-rule of Joseph Heller’s 1961 satire of bureaucratic folly in the U.S. military, has become a commonly-used English idiom to describe logically circular and contradictory rules. At Tea Leaf Nation, Rachel Lu explains that a translation of the term (第22条军规) is now taking hold in China, a land rife with bureaucracy and liberally decorated with red tape:

[…] A recent search on Baidu, China’s largest search engine, found over 4.9 million mentions of the term, which literally translates as “military rule clause 22.”

[…] For a petitioner lining up outside Beijing’s State Bureau of Letters and Calls (the highest rung in the petitioning ladder), or a newspaper editor grappling with the baffling intention of the latest censorship directive, or a migrant worker sifting through layers of bureaucratese to decipher the conditions he must fulfill to gain an urban residency status, a different culprit bedevils daily life: the onerous laws and nonsensical policies baked into many forms of Chinese social control.

[…] In April 2010, the southern city of Kunming released a draft regulation that forbade employers from hiring migrants who did not hold a residency permit there. Yet in order to obtain the permit, the regulation decreed, a migrant must first hold a steady job. With its circuitous logic, the regulation would have essentially banned millions of migrants from settling in the city. It ignited a fierce public outcry, prompting newspaper editorials with headlines such as, “Does Kunming have its own version of Catch-22?” City authorities eventually revised the regulation in its official version the following year, granting migrants a short window between finding housing and employment and applying for a residency permit.

In another case, the Fengtai district government in Beijing ruled in March 2011 that individuals under collective residency status — a type that registers one under a school or company as opposed to under one’s own name — were not allowed to purchase apartments in that district. Affected citizens were incensed, pointing out that according to existing law, an apartment is required before one is eligible to convert a collective residency status to an independent one. Even Xinhua, the Communist Party’s official wire service,condemned the policy, calling it “a Catch-22-style ruse” in an editorial, and wondered if “certain uninformed officials pulled it out of their heads.” The government later rescinded the restriction under public pressure, though it still excluded those registered under their schools — namely, recent Beijing college graduates from other provinces — from the ranks of local homebuyers. […] [Source]