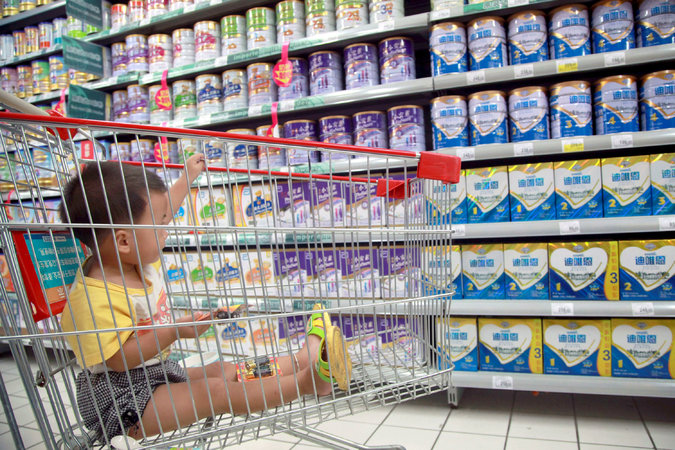 The restrictions appear to be the latest attempt by the government to reduce the enormous demand for foreign-made dairy products and bolster the sales of domestic brands.

The new restrictions require foreign makers of milk powder to register the products, as well as their manufacturing and storage centers, with the government before the products can be sold in China. On Monday, The Beijing News released a list of the 41 foreign companies and manufacturing sites that have been registered so far. It includes subsidiaries of Nestlé, a Swiss company, in Germany and the Netherlands; Wyeth Nutrition, a company that Nestlé recently bought from Pfizer, in Ireland; Abbott Laboratories, an American company, in the Netherlands; and Nutricia, owned by Danone of France, in New Zealand, Germany and the Netherlands. The list could expand as more companies apply to register their products with China’s General Administration of Quality Supervision, Inspection and Quarantine. [Source]

Heather Timmons at Quartz adds that the Chinese government plans to reverse-engineer the breast milk of Chinese women:

The government is spending $1.6 million on a project to try to replicate Chinese mothers’ milk, Zhang Xiaohua, an official with the Beijing Science and Technology Commission, said this week. The project will “study the ingredients and active constituents of the breast milk of Chinese mothers and set up a breast milk database for developing the formula,” the People’s Daily reported. (The project will also “boost” China’s domestic dairy companies, the state-run paper said.) Until now the domestic formula makers have been relying on World Health Organization guidelines for what should be in infant formula.

While early versions of commercially manufactured infant formula were often fortified cow’s milk, modern formula contains a number of ingredients that attempt to mimic ingredients found in breast milk—but it’s unclear how effective and well-absorbed these ingredients are. [Source]