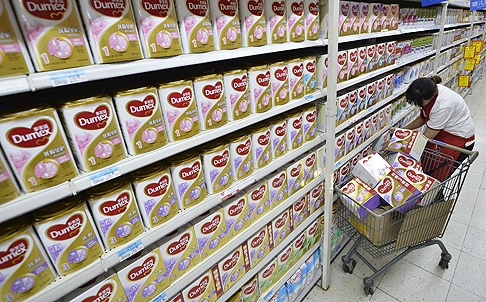 After accusing Danone of bribing Chinese doctors to provide their Dumex brand baby formula last week, CCTV has widened its allegations against the French food manufacturer with a fresh broadcast. The South China Morning Post reports:

[…T]he television channel yesterday expanded its claims, saying Dumex had paid out nearly 500,000 yuan in bribes in April alone to doctors and nurses in Beijing and five northern provinces – Heilongjiang , Hebei , Liaoning , Jilin , and Inner Mongolia – as well as Tianjin.

It also hinted the investigation may widen further, saying: “The evidence of bribery obtained by the CCTV reporter covers only the northern region, and Dumex operates in six major regions in China.”

Dumex said yesterday in an e-mail to the South China Morning Post: “Dumex pays great attention to CCTV’s reports. A thorough investigation was launched a few days ago and is ongoing. The report will be available before October 1.”

Nutricia, another of Danone’s subsidiaries, is also under scrutiny for bribery. Following a recent report in the private 21st Century Business Herald alleging bribery, Nutricia has launched an internal investigation. From the New York Times:

Danone’s advanced medical nutrition unit, Nutricia, has started an internal investigation after a Chinese newspaper published a report alleging it had bribed more than 100 doctors in Beijing to increase sales, the company said on Wednesday.

[…]Nutricia, which makes Karicare milk formula, bribed doctors at 14 hospitals in the Chinese capital with kickbacks, gifts, funded travel and complimentary show tickets between 2010 and 2013, the 21st Century Business Herald said on Wednesday, citing an unnamed whistle-blower who claimed to be a student doctor.

“We only saw the report this morning, so we’ve only just started an internal investigation into the matter,” Zhao Qinghua, a spokeswoman for Nutricia in China, said.

“At the moment we still don’t know the details,” she added. “We need to wait to see the outcome of the investigation before we can make our next plans.” [Source]

Foreign firms took advantage of an opening in China’s infant formula market after faith in domestic products was shaken by a melamine contamination scandal in 2008. However, ongoing probes into foreign companies have brought corruption allegations into the spotlight, and yielded fines for some firms. As foreign companies start to see friction in the form of government investigations and state-media allegations, state subsidies for domestic firms are increasing and industry consolidation is being encouraged. From Reuters:

As well as Yili and Mengniu, the first group of firms to benefit would include Feihe International Inc(ADY.BE), Heilongjiang Wondersun Dairy Co Ltd and Treasure of Plateau, the official ChinaBusiness Journal said in its Saturday edition, citing an unidentified source.

Authorities have said they want to consolidate the domestic milk powder sector to increase the ability of companies to compete with international rivals who dominate the lucrative premium end of China’s $12.4 billion infant formula market.

[…]Chinese milk powder firms would gain the support in the form of government subsidies, funds from China Development Bank and favorable tax policies, the China Business Journal said. The total amount would be about 30 billion yuan, it said. [Source]