China to Scrap Millions of Cars to Ease Pollution 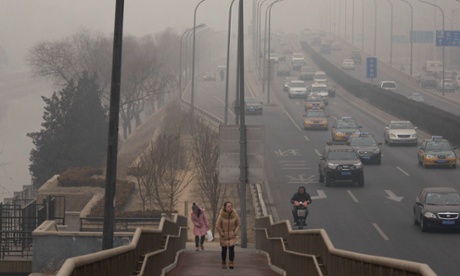 Jennifer Duggan at The Guardian reports that the Chinese government has announced plans to take up to 6 million vehicles which have failed to meet emission standards off the streets by the end of the year:

The move is part of a plan published by China’s cabinet, the State Council, which outlined emission targets for a number of industries over the next two years. The State Council said that some pollution targets are not being met for the 2011-2013 period and that action needs to be stepped up.

China is facing a “tough situation” in hitting its targets for energy and emissions for 2015, Xu Shaoshi, Chairman of the National Development and Reform Commission was quoted by state media.

One fifth of the vehicles to be scrapped will be in the northern regions of China, which have been the worst hit with air pollution. Hebei province, where seven of China’s smoggiest cities are located, has been ordered to scrap 660,000 cars that don’t meet emission standards. Up to 333,000 will be taken off the roads in the capital Beijing and 160,000 in Shanghai.

More vehicles will be scrapped next year with up to 5 million being removed from the roads of highly developed regions including the Yangtze River Delta, the Pearl River Delta and the smog-choked region of Beijing-Tianjin-Hebei. [Source]

This comes after Premier Li Keqiang declared “war on pollution” at the National People’s Congress in March amid mounting public concern. At Quartz, Gwynn Guilford explains that the Chinese government’s efforts to mitigate air pollution have partially backfired, slowing down the economy as a result:

However, recent analysis of economic data by Wei Yao, an economist at Société Générale, found that “Chinese policymakers are getting serious about air pollution.” So serious, in fact, that those efforts are already hurting GDP performance—something the government has so far shown to be its biggest priority. Yao says GDP will slow 0.35 percentage points cumulatively from 2014 to 2017 because of air pollution mitigation efforts, and she expects the economy to take the biggest blow this year.

The biggest indicator comes from China’s industrial output—the output of China’s manufacturing, mining and materials sectors—where growth has slowed significantly since September, when China’s cabinet rolled out its air pollution action plan. Last August that indicator hit a 16-month high of 10.4% growth versus the same month in 2012, but industrial production expanded only 8.7% last month. That’s the slowest since March 2009, just after the financial crisis hit:

That slowing of output comes disproportionately from high-polluting northern provinces, which accounted for three-quarters of the 1.7-percentage-point slowdown in national industrial production since September. “Our comparison of all regional data shows that the more polluted the region, the greater the slowdown,” writes Yao. [Source]

Eileen Shim at PolicyMic emphasizes the grave nature of the pollution problem that plagues Beijing:

Why this is important: China’s air pollution problem cannot be overstated. Things have gotten so bad that some cities have resorted to shooting giant water cannons into the air and confiscating outdoor grills. The country’s infamous smog is reportedly driving away foreign talent, forcing tourists to buy smog insurance and leading the wealthy to take flight. Air pollution levels in Beijing are 20 times higher than safety standards — and can even be seen from outer space. On top of all that, China’s smog is getting so big that it’s affecting weather patterns around the world and now hurting America.

The Chinese government has pledged to move power plants and clean up the air in cities. Unfortunately, not much has been done so far. In the meantime, 40% of the 7 million people worldwide who died from air pollution in 2012 were from China.

Under these dire circumstances, it’s completely understandable why the Chinese government would take such a drastic step — the question is whether it will be drastic enough. [Source]