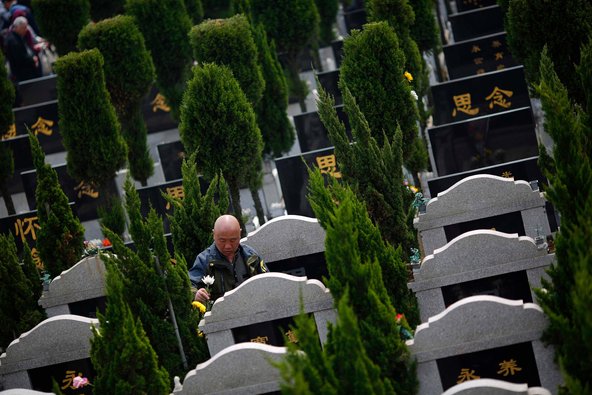 Didi Kirsten Tatlow at The New York Times reports that some elderly people in Anhui have committed or attempted suicide to avoid new rules promoting cremation over burial:

The [Beijing News] said its reporters had visited villages in the area and could confirm six suicides tied to the threatened or actual seizure of coffins. Wu Zhengde, 91, was one.

One hour after his son, Wu Dawang, a retired school principal, returned from a meeting in Xindian village on May 6 to tell his father that officials would begin seizing coffins in compliance with the new policy, Mr. Wu hanged himself from a tree.

Burial in an elaborate coffin is a cultural ideal in most parts of China. To try to save valuable agricultural land, the state specifies that cremation should be the norm, but it has left it up to localities to implement.

[…] “Life must be respected, and the people’s opinions must be held in awe,” Zhi Fan wrote. “In the face of ‘elderly people ending it,’ the relevant authorities should at least reflect: Funeral reform should accord with contemporary funeral and burial customs, and they must be careful of the manner in which they implement it.” [Source]

Officials have also faced accusations of insensitivity in Zhoukou, Henan, which has seen a long-running battle over the demolition of existing graves to reclaim farmland—or, according to locals’ suspicions, to make way for industrial and property development.