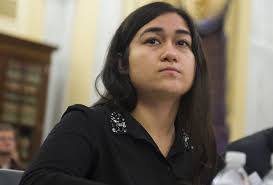 “It feels empty without him. I feel very lonely. For most of my life, he has always been near me. … I worry about how he is doing, how he is being treated,” she said.

Back in Beijing, her stepmother and two brothers remain under constant surveillance by authorities. They have received virtually no updates from authorities since Ilham Tohti’s arrest, aside from a warrant in February that revealed he had been taken to a detention center in Urumqi, thousands of miles away from their home. The family has not been allowed to see him even once. They have had to rely on the Internet for news and developments in his case. Furthermore, Ilham Tohti has been denied access to his lawyer, according to his daughter.

In her father’s absence Jewher Ilham has become his steadfast advocate, speaking out for his release, despite the odds given China’s abysmal record as one of the leading jailer of journalists in the world. CPJ research shows that at least 50 percent of the journalists imprisoned in China in 2013 were ethnic minorities, including Uighurs. CPJ highlighted Ilham Tohti in its recent 10 Journalists To Free from Prison campaign ahead of World Press Freedom Day on May 3.

Jewher Ilham is not giving up. Last month, she spoke before lawmakers at a hearing in the U.S. Congress. And this past week, she accepted an award on behalf of her father at the PEN American Center Literary Gala in New York. While in New York and Washington, Jewher Ilham’s schedule has been packed with meetings with various organizations, including CPJ, to help draw attention to her father’s imprisonment. [Source]

Ilham Tohti has been charged with separatism and has been detained since January 15, 2014 without legal representation.  In 2009, Tibetan writer Woeser interviewed Ilham Tohti following violent riots in Xinjiang in July of that year. In the interview, he discusses the possibility of going to prison and also discusses his concerns for his daughter and the rest of his family as well as his commitment to non-violence. Zeng Jinyan has posted an excerpt of the interview and a link to the translated transcript  on her blog, where the full interview is available for purchase on DVD: