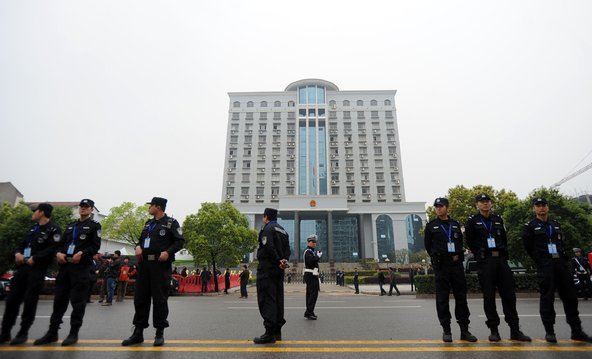 Mining tycoon Liu Han, the founder of Chinese conglomerate Hanlong Group who is believed to have links to China’s former security chief Zhou Yongkang, has been sentenced to death for leading illegal gang activities. Megha Rajagopalan at Reuters reports:

A former mining magnate with suspected ties to the family of China’s retired security tsar Zhou Yongkang was sentenced to death on Friday on charges of leading a gang on a crime spree spanning two decades.

The sentencing of Liu Han, handed down by a court in the central province of Hubei, was the culmination of one of the highest-profile cases against a private businessman since President Xi Jinping took office last year and began a campaign against pervasive graft.

[…] Sources have told Reuters that Liu was once a business associate of Zhou Bin, Zhou Yongkang’s eldest son.

In addition to Liu Han and his brother, three others from Liu’s gang of thirty-six people were also handed the death sentence. Liu’s Hanlong Group was also fined for falsifying information to banks. Michael Forsythe at the New York Times reports:

Liu Han, 48, and his younger brother, Liu Wei, were sentenced on Friday by a court in the central province of Hubei, with the punishment announced on China Central Television. The two were at the apex of a gang of 36 people charged with crimes including intentional injury and the murders of eight people. Three other gang members were also sentenced to death, with the rest handed sentences including life imprisonment and suspended death penalties, the provincial government reported on its news website.

Mr. Liu’s arrest in March of last year had international implications because he was in talks to buy an Australian mining company, Sundance Resources. The deal collapsed the following month. In 2009, his flagship company, Sichuan Hanlong Group, bought a controlling stake in another Australian mining company, Moly Mines. The Sichuan Hanlong Group was also punished, with a fine of almost $50 million, for providing false information to banks to obtain loans and other infractions, the state news agency Xinhua reported on its microblog site.

Prosecutors painted a picture of two brothers who would stop at nothing to build their wealth, which amounted to 40 billion renminbi, or $6.4 billion, Xinhua reported in February, when the gang was charged. The brothers’ business operations ranged from gambling to construction materials. [Source]

Staff and executives who have worked with Liu at the Australian company Moly Mines, which Liu has a controlling stake in, said that the Chinese mining magnate was known to them as a philanthropist and a big spender but not as a gang-leading criminal. David Lague and Charlie Zhu at Reuters report:

Former managers and staff at Liu Han’s Australian operations were dumbfounded when the Chinese tycoon went on trial last month for leading a murderous, mafia-style gang.

In 2009 when Liu, 48, launched a bid to take control of Moly Mines, executives then running the Perth-based company ordered background checks. Their findings could not have been more different: Liu was best known in China as a philanthropist in his native Sichuan province.

[…] For Moly Mines, Lieu’s philanthropy enhanced his credibility as an investor in Australia. “No one said he was a criminal”, says Collis Thorp, then chief operating officer of Moly Mines and a veteran of Western Australia’s booming mineral sector.

[…] To his local staff, the head of the biggest privately held group in Sichuan appeared to be a stereotype of a cashed-up mainland tycoon – one former employee noted a diamond-encrusted, custom-made Franck Muller watch on his wrist. [Source]

The trial and charges revealed a completely different portrait of Liu as an criminal offender who engaged in a range of illegal activities that include murders, bribery, and kidnapping. From a Reuters special report by Benjamin Kang Lim, David Lague and Charlie Zhu:

Far from a benevolent high-roller, Liu was portrayed as a violent and ruthless crime boss. He and his brother were accused of leading a gang responsible for nine murders, multiple assaults, harboring criminals, obstruction of justice, loan fraud, kidnap and contract rigging.

[…] Ahead of his trial, state-run television broadcast an interview with his wife Yang, dressed in what appeared to be prison garb, where she described how Liu paid off government officials. “He would take me to dinner with them and during dinner he would give them lots of gold, jade and other precious gifts worth several hundred thousand to millions of yuan,” Yang said. “Sometimes he bribed them through gambling.” The pair appear to have been divorced since Liu was detained because Yang was described as his former wife in this interview and another televised excerpt of the trial carried on state television.

While Liu Han insists he is innocent, his brother Liu Wei has pleaded guilty and told the court he was ready to accept punishment for his crimes. All 36 defendants in the case are in custody and awaiting the trial verdict.

[…] Visibly distressed and in tears at stages of his trial, Liu seemed to understand he would be lucky to escape a harsh penalty if found guilty. As Yang was escorted from the court after giving evidence in a televised segment towards the end of his trial, a sobbing Liu called out to her. “Look after the children,” he cried, “look after my mother.” Yang promised she would. [Source]

Chinese authorities have recently issued a censorship directive to restrict the online circulation of an article on Liu called “The Network of Authority and the Criminal Underworld: the History of Liu Han’s Wealth.”

See also more about the investigation into Zhou Yongkang and the ongoing crackdown on corruption in China.