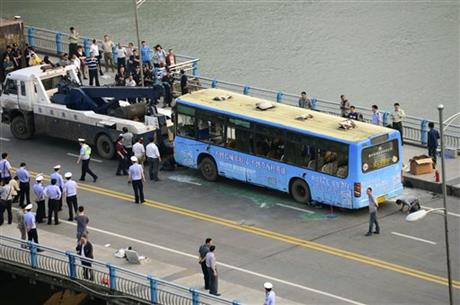 According to most recent reports, 77 were injured in a bus fire in Yibin, Sichuan Province. Xinhua reports that the fire was believed to have been caused by arson, and the suspect is the only casualty:

Local government sources said Tuesday morning that the arson suspect of a bus fire is the one who was killed in the incident in Yibin, southwest China’s Sichuan Province.

Yu Yuehai, 51, was allegedly to have ignited the bus fire. His intention is still under investigation, according to the government of Yibin city.

The bus caught fire at 4:50 p.m. on Monday when the bus was running along Nanmen Bridge, said Hu Jingwen, a 12-year-old girl who was sitting on the last row of the vehicle.

All together 77 people have been hospitalized, including three seriously injured and nine in critical condition. [Source]

12 of those injured remain in intensive hospital care. A report from the AP describes other recent bus fires set as acts of reprisal by angry arsonists:

[…] Last year, a Chinese man set fire to a commuter bus in the southeastern port city of Xiamen, killing himself and 46 others. A deadly bus fire in 2009 killed 27 people, including the arsonist, in the central city of Chengdu. Both men were believed to be acting in vengeance against society in China, where tensions have been on the rise because of growing gaps in wealth and a lack of social security.

In February, a man suspicious of his wife’s infidelity admitted to setting a fire aboard a bus that killed six people and injured 35 others in the southwestern city of Guiyang. [Source]

The New York Times contrasts the bus driver’s brave actions to help passengers escape the blaze with the conduct of the crew aboard the South Korean ferry that sank in April—which President Park described as “akin to murder”:

The driver of a bus that erupted in flames in southwestern China on Monday afternoon stayed aboard the blazing vehicle as he used a fire extinguisher, smashed a window with a safety hammer to create an exit and then helped passengers leave the conflagration, a municipal government statement said on Tuesday.

The driver, Xiao Kunming, suffered severe injuries staying aboard the bus, and is now being treated at a hospital and unable to give interviews, according to statements issued on the Weibo microblogging site by the municipal press office of Yibin, the town in the southwestern province of Sichuan where the incident occurred.

The driver’s actions, filmed by the camera system on the bus, come as international attention has focused on the responsibilities of transportation personnel during deadly incidents, and they are likely to draw a favorable contrast with the departure of crew members from a capsizing South Korean ferry last month. [Source]

The bus fire in Sichuan comes as security measures are tightening up throughout the country following a series of violent attacks.