Word of the Week: Small Bunch 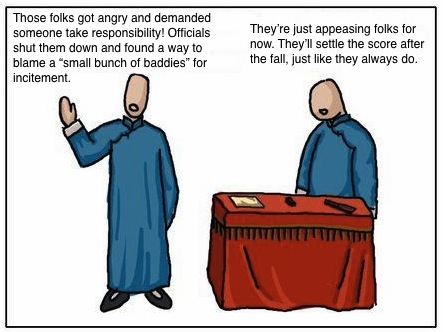 Panel from “The Small Bunch.”

Literally a pinch, a scoop, or a measurement equivalent to a millimeter; used figuratively since at least the Cultural Revolution to denote a group of wrongdoers. “A small bunch” appears in official reports of both the Tiananmen Square protests and the Weng’an Riot.

An official report will often say something to the effect that “a small bunch of ‘baddies’ with ulterior motives had a hidden agenda to ‘fan the flames,’ thus ‘deceiving’ the masses who don’t understand the actual situation (一小撮别有用心的人“怀着”不可告人的目的“煽风点火”，而“不明真相”的群众则受其“蒙蔽”). Critics complain about the use of stock phrases like this because they minimize the underlying social ill that leads to disturbances and portray the aggrieved populace as simply being duped by a small group of troublemakers.

An anonymous explanation of the phenomenon:

Tags :propaganda,protests,word of the week

Children Held in Xinjiang Amid Accusations of “Cultural Genocide”