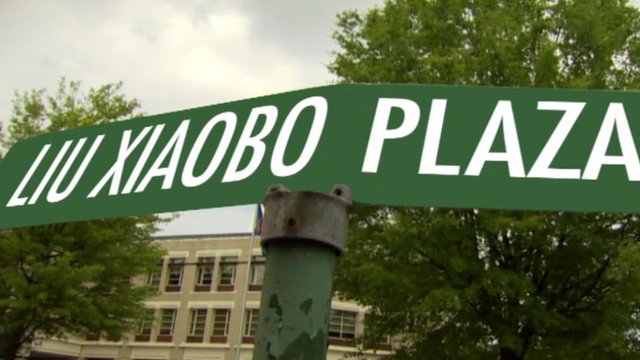 Following a call from U.S. lawmakers, the House Appropriations Committee has voted in favor of renaming the street outside of China’s Washington embassy in honor of human rights activist Liu Xiaobo. Liu, a Nobel Peace Prize laureate and Charter 08 co-author, has been serving an eleven-year prison sentence for subversion of state power since 2009. From TIME:

Alert the post office. The official address for the Chinese embassy in Washington may well be changed to 1 Liu Xiaobo Plaza. On June 24, the House Appropriations Committee voted to rename 3505 International Place, a strip of asphalt that runs in front of the Chinese mission in northwest D.C., after the jailed Chinese Nobel Peace Prize laureate.

[…] The bid for the new Chinese embassy mailing address was tacked on as an amendment to the 2015 State Department spending bill. The road in front of the Chinese embassy is federally owned, giving Congress some latitude in deciding its fate. (The D.C. Council will also consider the resolution.) Fourteen bipartisan Congressmen, led by Virginia Republican Frank Wolf, shepherded the provision, which calls for U.S. Secretary of State John Kerry to institute the name change. A street sign adorned with Liu’s name is planned.

[…] The naming of 1 Liu Xiaobo Plaza was spurred on by Dissident Squared, an advocacy project that describes as its mission “to rename streets fronting the embassies of closed societies — Iran, China, Russia, Saudi Arabia and Syria — for imprisoned or murdered dissidents.” […] [Source]

While the bill is expected to receive support from the rest of the House of Representatives, Foreign Policy notes a lack of clarity surrounding its fate in the Senate. The decision also requires approval from the D.C. Council, and the Washington Post reports that Council Chairman Phil Mendelson has introduced a resolution of support, citing precedent of renaming D.C. roads in effort to exert diplomatic pressure. Prior to the House Appropriations Committee vote, a letter signed by 13 representatives (Virginia Republican and veteran China critic Frank Wolf led the pack) was sent to the D.C. Council and Mayor. The letter was sent on May 29, and directly mentioned the upcoming 25th anniversary of June 4th, 1989, on which “the Chinese government brutally employed military force to suppress peaceful pro-democracy demonstrators.”

Unsurprisingly, Beijing is not pleased with the influential congressional committee’s decision. The Guardian relays comments from China’s Ministry of Foreign Affairs:

“Some people from the United States have used so-called human rights and the Liu Xiaobo case to engage in this meaningless sensationalism,” China’s foreign ministry spokeswoman Hua Chunying told a daily news briefing.

“It is nothing more than an attempt to smear China. We think this is purely a farce.”

[…] Hua reiterated China’s stance that Liu had violated Chinese law. Last month, China criticised as “provocative and ignorant” a group of US lawmakers who called for the street to be named after Liu. [Source]

Just prior to foreign ministry spokeswoman Hua’s comments, newly installed U.S. Ambassador to China Max Baucus delivered a speech in Beijing. While he applauded the countries’ economic ties and mutual commitment to a “new model” of relations, he also mentioned that the governments remain divided on human rights. From McClathy DC:

Two hours before she spoke, U.S. Ambassador Max Baucus delivered his first substantive speech in China since he took the post earlier this year. Speaking to a Beijing luncheon of U.S. business organizations based in China, Baucus noted the strong economic ties between the countries and the commitment of Obama and Chinese President Xi Jinping to a “new model” of relations.

“In the past year, China has arrested several moderate voices who had peacefully advocated for such basic things as good governance and the rights of ethnic minorities and the rule of law,” Baucus said.

While Baucus didn’t name names, it was likely he was referring to Pu Zhiqiang, who was arrested last month, and Xu Zhiyong, who was sentenced to four years in prison earlier this year. Both were detained on charges similar to those that sent Liu to prison. [Source]

Economy said that renaming a street will not do much to support political reform in China — an ongoing, albeit controversial, project of the Xi Jinping administration, which has mounted a massive crackdown on corruption in the public sector.

[…] Gao Wenqian, New York–based senior policy adviser with the international advocacy group Human Rights in China, disagrees with the idea that gestures like Washington’s further the belief that the West has a monopoly on human rights.

“China’s human rights situation must first and foremost rely on people on the inside, but also depends on international support,” he said.

[…] Gao believes that renaming the street in front of the embassy after a dissident is a major show of support for democracy advocates in China. [Source]

Online in China, meanwhile, a post on Sina Weibo was getting a lot of “forwards.” It reminded readers that in 1966, at the height of the Cultural Revolution, Red Guards renamed the street outside the Soviet Embassy in Beijing “Anti-Revisionism Road.”

Another post, from a commenter with the online handle “Black America,” complained that the congressional action was an example of “American imperialism.”

But, in what appeared to be an illustration of the rights issues members of Congress said they wanted to highlight, the commenter was unable to break through Chinese censorship to write the name “Liu Xiaobo.” Instead, he referred to “Someone Someone Someone.” [Source]

While some in Washington try to exert pressure on China for its human rights record, Beijing is steadily guarding against external ideology and “Western calls for political reform.” For more on U.S.-China relations, see prior CDT coverage.