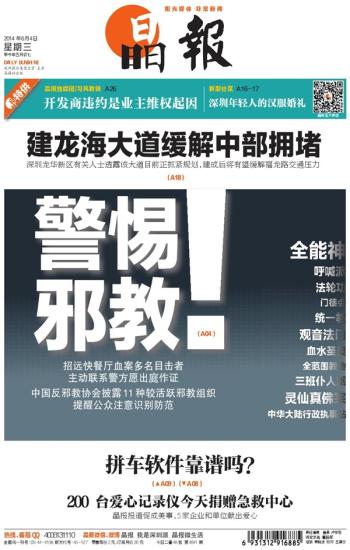 Austin Ramzy at The New York Times reports that a Beijing-based web editor has been detained “on suspicion of posting a doctored photo that linked Mao Zedong with a fringe religious group accused in a high-profile murder”:

The police visited Zhao Mu, a blog editor for the Chinese web giant Sohu, on Tuesday and are holding him on a charge of “picking quarrels and provoking trouble,” said the lawyer, Liu Xiaoyuan, citing conversations with Mr. Zhao’s family. The charge has recently been used to detain lawyers and activists who participated in events to mark the 25th anniversary of the deadly crackdown on the Tiananmen protest movement.

In Mr. Zhao’s case, the trigger for his detention appears to be a photo he posted on his microblog account this week. The black-and-white image shows young Chinese students in a classroom during the Cultural Revolution. On the blackboard behind them are phrases praising Mao, the founding leader of the People’s Republic of China. One, which was apparently altered, reads “Chairman Mao is our heart’s Almighty God.” The photo originally said “Chairman Mao is our heart’s red sun.”

The Church of Almighty God has been declared a cult by the Chinese government. The group, which preaches that God was reborn as a woman in China, has been accused of using violence and blackmail to recruit followers. Several Almighty God members have been arrested in Shandong Province on charges of beating a woman to death in a McDonald’s restaurant when she refused to give them her phone number. [Source]

Read more about the murder at McDonald’s via Bloomberg. The China Story has translated a list of “the eleven most active religious cults in China currently,” which includes an account of the group’s origins:

2. Almighty God (全能神): Split off from The Shout (呼喊派, see below) in the 1990s, when it became a separate entity under the leadership of Zhao Weishan (赵维山). The cult believes that the one true God revealed himself as a second Christ in the form of an Asian woman to save the Chinese nation. Zhao fled China for the US in 2000; many members of the cult have committed crimes of homicide and public disorder, with the latest being the murder of the woman in a McDonald’s outlet in Shandong on May 28.

3. The Shout (呼喊派): Established by Li Changshou (李常受), a US citizen, in 1962 in the US, the cult has a presence all over the world and many links with other religious organizations, and tries to organize in mainland China as well. [Source]

Read more about the Church of Almighty God including its involvement with 2012 apocalypse rumors, via CDT.