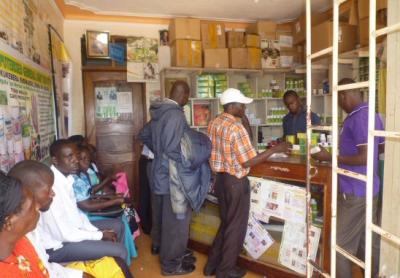 At Think Africa Press, James Wan reports that 200,000 Ugandans have signed up for a company which carries Chinese labeled “herbal” medicines, “believing it will cure all their illnesses and help them make a fortune”:

“This is one of the scanners,” he explains, pointing to a piece of kit that looks a bit like a 1970s radio. “It shows everything. We can see if you have diabetes, kidney deficiencies, liver problems, eye problems. Everything.”

[…] TIENS − also known as Tianshi − is a multinational company based 10,000 miles away in the Chinese metropolis of Tianjin. It was founded in 1995 by Li Jinyuan, who has since become a billionaire from the venture. The company has established branches in 110 countries including 16 in Africa, employs over 10,000 staff globally, and reportedly enjoys net profits worth hundreds of millions of dollars each year.

TIENS first began tapping into the Ugandan market in 2003 and it has grown steadily ever since. There are now around 30 stores across the country, TIENS distributors regularly engage in outreach programmes to rural communities, and according to the company’s national chairperson, Kibuuka Mazinga Ambrose, TIENS-Uganda has an annual turnover of around $6 million.

[…] If not from selling products to the public then, the bulk of the money in the TIENS system comes members’ own pockets as they pay to join, pay to move up the rankings, and pay to keep their accounts open. And it is this same money that finances top-level distributors’ huge salaries, shiny new cars and trips around the world. Given all the money in the system comes from members, the only way this tiny elite profits is because the rest of Uganda’s 200,000 members do not. [Source]