A Eulogy for the Cenci Journalism Project 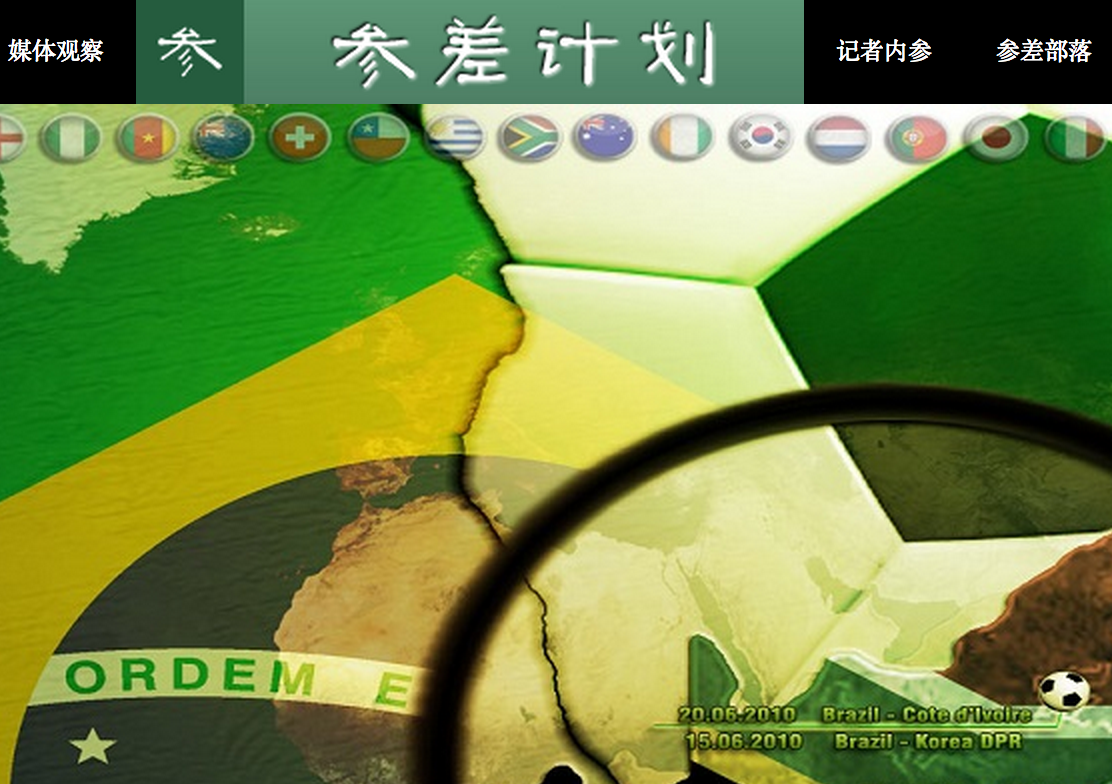 Since 2011, the Cenci Journalism Project has been “reporting another dimension of the world,” allowing Chinese-speakers to access diverse global coverage of marginalized topics through translation. Earlier this month, the Cenci Project’s website became blocked by the Great Firewall. In a lengthy (and now inaccessible) WeChat post immediately following the website’s blocking, project founder Kang Xia described his experience building up the nonprofit, his pain in watching its harmonization, and his thanks to the countless volunteers that helped him realize his goal:

From now on, there is no Cenci Journalism Project.

At 20:00 on July 14, I was chatting idly with friends, with my “battery killer” of an iPhone charging on the side. Sharp pain from my freshly removed teeth made me grimace as I talked. It couldn’t be any worse, I thought.

When my phone was fully charged, I turned it on. I had 400 unread messages in WeChat, as usual. Holding my swollen cheek with one hand, I deleted all the unread group messages with the other. Huh? Someone asked me why they could no longer visit the Weibo page of the Cenci Project.

Probably it had been shut down, damn it. I then asked my Weibo friends what was happening and how long the shutdown would last. “No big deal,” I typed in the Cenci Project’s WeChat, hoping to first calm everyone down, and then see what solutions we had.

Before I could finish sending the message, I received a phone call from Yang Chu and Zhuo Xing, “Where are you? Are you safe? What happened? Why was your phone switched off?!”

Half an hour later, I rushed back to my home in Shuangjing by taxi. Feng Xiao, Yang Chu and Zhuo Xing were all there. In the hour my phone was switched off charging, Cenci Project’s Weibo had been shut down, as had its WeChat and Douban accounts. Even our many QQ groups for internal communication had vanished without trace.

Perhaps these friends of mine thought that I’d also vanished altogether.

I made several phone calls trying to negotiate a fix to the situation, got some WeChat messages, and then I learned the reason [for the shutdown]. I slumped onto the couch, realizing that the Cenci Project was finished.

On July 15, the domain name of Cenci Project (www.icenci.com) was blocked by the Great Firewall—people could no longer visit the site without without breaching the Wall. My personal Weibo was also shut down, @康夏Eric and his more than 2000 posts also vanished. All volunteers with a “Cenci Project” suffix had their Weibo usernames turned into random numbers.

A friend sent me an email marked “read and delete,” an order to delete some reposted article. Then, Cenci Project’s app and its search results on Baidu, as well as every single interview of mine, would vanish from the world without a trace, like they’d never existed.

My teeth were killing me. With my back bent, I replied to every WeChat stream telling people to keep calm. I squeezed the fingers of my right hand with all the strength of my left—I do this every time I have a dental surgery or have to give a speech. It felt like all my friends had died. I wanted to write 1000 obituaries, but I knew that obituaries wouldn’t bring them back.

When you are a little sad, you binge eat; when you are sadder, you cry; when you can’t endure the hopelessness, you scream, smash bowls and furniture; then the level of hopelessness deepens more, and more…

I didn’t want to eat or cry. I didn’t wish to talk. I walked around the room, again and again. I turned on my computer. The Weibo page could not be visited. What used to be my homepage, icenci.com, had become “this page cannot be displayed.” I refreshed the page, again and again. It went on like this for an hour.

Friends, elders, teachers, readers, and some people I barely even knew were asking me on WeChat, “what happened to the Cenci Project?” I didn’t want to reply, fearing that while a bloated answer would disappoint others, a real answer would only embarrass me. So I just pretended not to see the question.

When you have devoted so much to one thing, it becomes your very core. From 2011 until now, I graduated from college, studied abroad, returned China to look for a job, interned, worked, quit, and then re-applied to school. In these many years, I had tried to get up at 7 am everyday, go for a jog, read for an hour in the evening, look over one page of The Encyclopaedia Britannica before bed, contact a long-lost friend every midday—not a single one of these things had I managed to carry on. Most of them I abandoned halfway, but the Cenci Project was the only one I’d ever stuck to.

In August 2011, as I was preparing the Cenci Project, I was about to graduate. But my GPA was at stake, and I needed good grades for my study abroad application. Time was running out. In December 2011, Cenci Project was losing members, and internal conflict was fierce. No one wanted to do trivial tasks like manage Weibo posts. We also barely had any followers, which was disappointing.

A June 2012 report in Beijing Weekly introduced Cenci Project to a wider audience. More and more people thought that Cenci’s translations were pretty much the same as content in Reference News. In October 2012, while I was in Britain, the organizational structure of Cenci volunteers broke at the upper-middle level, and our content frequency became unstable. Often times there were only one or two new articles each week.

In July 2013, I started my first job. The work was abundant and trivial. As a journalist, the amount of energy I spent on an article depended entirely on my self-discipline. I scheduled over eight hours for work everyday, and the rest of my time I gave to the Cenci Project. I was in HR, a designer, in public relations, an event planner, an editor, a journalist, and a copywriter. It was common for me to stay up as late as 3 or 4 a.m.; Red Bull became my life elixir. In April 2014, two headhunters talked to me individually about investing in the Cenci Project. Commercializing would change the original spirit of volunteerism and our ambitions to provide alternative reporting, and that spirit and focus on marginalized groups were at the core of the Cenci Project. However, at the time everyone around me was talking about entrepreneurship. Attracting investment sounded right, since glory and superiority also had to be achieved.

In June 2011, after being “invited to tea” countless times over the Cenci Project, I was fed up. I thought the whole “reporting another dimension of the world” thing had turned me into the idealist book publisher in Too Loud a Solitude, who was building a house with his unrealistic fantasies. The house had candy, cheese, crackers, jelly—all these things. However, in reality, he had nothing but a bottle of spoiled milk.

This year in early July, Cenci volunteers in Beijing had a big offline party. The first since the revision of the website, and, unexpectedly, the last. There were over 30 volunteers, and we had vodka, tequila, and beer. Seeing each other face-to-face for the first time was a little embarrassing. I drank myself  into a total, record-setting blackout. After I came to the next day, I heard I’d acted crazy, holding other people firmly and not letting them leave, laughing and crying at the same time.

I don’t like alcohol. I don’t like dinner parties, chitchat, or workplace gossip. But I like who I was on that day, even though I had a headache for two days from the hangover, sent lots of embarrassing WeChats to my elders, and my intoxication was caught on videotape by the volunteers.

That day, all I wanted to do was say “thank you.” But, I thought “thank you” seemed too easy, and I couldn’t think of any alternative. So I drank till I passed out. The “thank you” was for those who devoted far more time than expected from a volunteer, and did all sorts of work for the Cenci Project: Chen Nan, Katara, Fang Yuan, Wang Fan, Wang Dengfeng, Alyssa, Yu Benyi, my classmate Qin, Yang Zhenjing, Yu Yichun, Zhong Ping, Liu Mingzhu, Zhao Yating, Hao Zhongya, Wang Mei, Lai Wei, Feng Shuai, Zhou Weile, Wu Weichen, Jin Xianan, Li Xiaoyuan, He Yining, Jennifer, Zhou Hao, Gao Honghao, Lou Qiqin, Hong Tao, Han Guimeng, Hong Tu, Liu Zhuoya, Jiang Wan, Mo Pianxiao, Wang Shijing, Yue Xiaoya, Lin Rong, Ma Suping, Chunyu Bingzhai, Zhou Nanjun, He Yaqing, Zheng Yao, Zhou Zidong, Guan Fanfu; those journalists who reported and promoted the Cenci Project: Xu Bei, Wang Mengying, Zhou Xinyuan; those readers who spent RMB to buy our poorly printed postcards, just to give us their warmhearted support; and those seniors and friends from the Pulitzer Center, the U.S.-China Dialogue, WCS, Century Weekly, Phoenix Weekly, ThePaper.cn, Asian Business Leaders, etc, who pushed for cooperation with the Cenci Project. You all made the Cenci Project shine when it was alive.

After the revision of Cenci’s website this year, I wrote the article “Together, We Report Another Dimension of the World.” In it, I said “my biggest ambition is that Cenci Project can last forever.” At the time, I thought I was quite pessimistic.

In Life of Caesar by Plutarch, Caesar finally decides to meet with the entire Roman Senate. With emotion, Plutarch remarks, “Fate, however, seems to be not so much unexpected as unavoidable.”

See, even Caesar is no exception—everything is doomed. Just like us—we met each other, and did this one thing together with simple and candid hearts, regardless of the cost or other people’s judgement. We didn’t earn a penny in this. We didn’t change the world. We didn’t even change ourselves. And shortly afterward, people will forget all about it.

I do not have complaints or resentment about his. The Cenci Project will not return. There won’t be another Cenci Project either. That’s it.

The language preparation for the [study abroad] application is over. Now I need to choose my major. I asked my friend Steph, “What if I go study accounting or finance?” She giggled for a second, then she raised her eyebrows when she realized I was actually serious. She looked at me incredulously and shook her head: “Kang Xia, that is so not you.”

I quoted Wilde on my blog: “A Map of the world that does not include Utopia is not worth looking at.” On the cover of the book she [Steph] gave to me, she quoted one of my favorite lines from Dead Poets Society: “Medicine, law, business, engineering, these are noble pursuits and necessary to sustain life. But poetry, beauty, romance, love, these are what we stay alive for.”

When you reach a dead end, dressed in tatters, wandering alone on an empty street, you will suddenly realize that if Fabre didn’t accomplish Souvenirs Entomologiques, if Van Gogh didn’t paint sunflowers, if Gu Cheng didn’t publish his poetry, and if Charles Strickland didn’t appear as the protagonist in The Moon and Sixpence, they would have all turned into a piece of transparent wallpaper.

The wallpaper can’t speak out. No one knows of its pain, filth, shabbiness, or fading but the wallpaper itself. [Chinese]