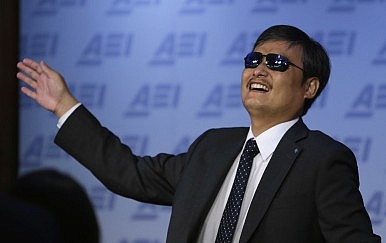 NYU law professor Jerome Cohen looks ahead to Chen Guangcheng’s move to Washington after two sometimes controversy-plagued years in New York. The Chinese legal activist will take up a primary post at the Witherspoon Institute, with additional roles elsewhere. From The Diplomat:

Negotiating Washington’s corridors of power will not be easy for Chen, who grew up in a poor village of 500 farmers and whose disability prevented him from starting school until he was 18. Yet he managed well during his two years in New York, apart from the widely-publicized and unfortunate spat that occurred when his comfortable fellowship at New York University came to its long-scheduled end. That incident cost him a significant amount of the overwhelming public support that had greeted him in New York. It has also made some other universities more skittish than ever about hosting other deserving dissidents at a time when American campuses and scholars are struggling to decide to what extent and under what conditions they should cooperate with Chinese educators and officials at home and in China.

Yet, contrary to the distorted image portrayed in “House of Cards,” Washington is made of sturdier stuff, and Chen will have the benefit of favorable ties that he has already forged in both the Republican and Democratic parties on Capitol Hill and in the NGO human rights community, where some earlier dynamic refugees from Chinese Communist oppression have attained substantial influence. [Source]

Cohen also looks back to the tangled aftermath of Chen’s shocking escape from siege-like house arrest in 2012. Comparing various accounts, Cohen writes that the story “would be a worthy sequel to the classic post-World War II Japanese film Rashomon.”

One version he describes is from Hillary Clinton’s memoir of her time as U.S. Secretary of State, which includes sharp criticism of Chen. At The Wall Street Journal, Michael O’Hanlon of the Brookings Institution suggests that her focus on these events threatens to overwhelm the rest of the book’s China-related content:

[…] Mrs. Clinton’s commitment to human rights is an important component of her thinking about China—and part of what makes her so good on China policy matters–but the long account about Mr. Chen also could distract from her larger observations about how to handle Beijing.

[…] There is a firmness in Hillary Clinton’s thinking about China that provides a good guide to policy and that is less well articulated by the current Obama team. She makes issues easy to understand. The clarity of her thinking, respect for China and awareness of how assertive it can be—and the stakes for the U.S.–bode well for how she would handle Beijing as president. [Source]

See (much) more on Chen Guangcheng via CDT.