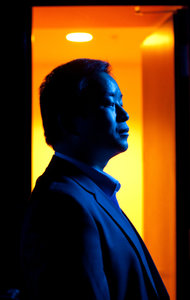 Author Murong Xuecun, who has been released from police custody after his “statement of surrender” led to his arrest for participating in a Tiananmen commemoration event, gave details of his time in detention. Edward Wong and Mia Li at the New York Times report:

Mr. Murong, a prominent author and critic of the Communist Party whose real name is Hao Qun, said in a telephone interview this week that police officers took him into custody at 5 p.m. on Tuesday and held him for eight-and-a-half hours because they had seen his open letter declaring that he wanted to turn himself in for the crime of “picking quarrels and provoking trouble.”

[…] The officers at the Wanshou Temple police station made an official record of Mr. Murong turning himself in, took notes and said they would conduct an investigation, Mr. Murong said. They said everything would be handled according to the law, he added.

The police asked him about where he was born, what schools he attended and what kinds of books he had written over the years, he said. They did not ask about his essays for the Times’s opinion pages, where he has been a regular contributor since 2013. “Either they didn’t know or they didn’t care,” he said.

[…] Mr. Murong said that after the police released him at 1:30 a.m. on Wednesday, he went out to eat with friends who had been waiting for him outside the police station. He returned home one-and-a-half hours later. [Source]

Murong Xuecun is one of 149 individuals affected by the government crackdown around the 25th anniversary of the 1989 democracy movement. From Chinese Human Rights Defenders:

Two months before the 25th anniversary of the Tiananmen Massacre, authorities in China began detaining, disappearing, questioning, and intimidating Chinese dissidents, human rights lawyers and activists, journalists, and others. Many of the targeted individuals took part in the pro-democracy demonstrations in the spring of 1989. The crackdown is meant to preemptively silence any public expression about the bloody suppression of the pro-democracy protests, and to prevent any show of support to victims and their families who have struggled for a quarter-century to tell the truth about Tiananmen and fight for justice.

CHRD has documented 149 individuals who have been affected, beginning at the end of April 2014, in Beijing, Chongqing, Guangdong, Guizhou, Hebei, Henan, Hunan, Jiangsu, Shaanxi, Shanghai, Shandong, Sichuan, Xinjiang, Yunnan, and Zhejiang, with 42 criminal detentions (17 are still detained) and 18 confirmed arrests. Additionally, 15 activists have received administrative detentions, and four are still out of contact. Twenty five have been released, with many facing strict police restrictions attached to “bail pending further investigation” conditions. [Source]

Meanwhile, China Change has translated an essay by journalist and commentator Chang Ping responding to an article published by Deutsche Welle’s China correspondent in which he criticizes Western coverage of the Tiananmen crackdown. Chang defends those who have spoken out to commemorate and recall their experiences during 1989:

Mr. Sieren writes that “We would perhaps never know what happened twenty-five years ago in Beijing,” and that “for those in the West to unilaterally exaggerate the facts in their description of the incident helps no one. To do so would be as shameful as the ongoing silence of the Chinese government about the 1989 incident.” He calls for “a pragmatic and fair assessment of Tiananmen.”

[…] Let us be clear on one point: when Chinese advocates call for making the facts of Tiananmen public, it’s not because they “do not know what actually happened.” Rather, they are fighting against the government’s cover-up, distortion and dilution of truth. One of the goals of those responsible for the massacre is keeping the theory that “the truth can never be known” in circulation. This is precisely why each of the last twenty-five summers in China kicked off with a crackdown: a large number of dissidents are rounded up and kept at home or in prison, and censorship keeps such a stranglehold over the Internet that euphemisms,cleverly wrought and thickly veiled allusions, and even the vaguest associations to the massacre are choked off before reaching the digital ether. The expanding economic might of the Chinese government has also persuaded some international media to self-censor in their reporting.

Under those circumstances, it is little wonder that Tiananmen Mothers, banned from mourning their loved ones, or those driven into exile for pursuing the ideals of democracy, or ordinary Chinese who, contending for justice, must live with constant lies and fear, are outraged when they see Tiananmen inaccurately reported by the Western media, and the Chinese government portrayed as wronged, misunderstood, and in need of a champion.

Read more about the 25th anniversary of Tiananmen, via CDT.