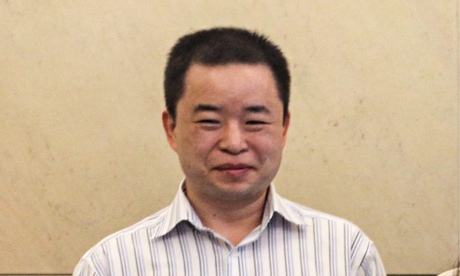 After author Murong Xuecun issued a “statement of surrender” to Chinese authorities last weekend—an expression of solidarity with those who were detained in the lead-up to the 25th anniversary of the June 4, 1989 crackdown on Tiananmen Square protesters—The Guardian reports that the outspoken novelist was summoned by police on Tuesday in Beijing. Murong was in Australia during the May 3 event that rights lawyer Pu Zhiqiang (now officially under arrest), Beijing Film Academy professor Hao Jian, and CASS researcher Xu Youyu were detained for participating in, but wrote an essay to be read at the event in his absence. In late May, the author published an essay in the New York Times detailing intentions to turn himself in upon returning to Beijing.

Murong – whose real name is Hao Qun – said that although his friends should not have been detained it was wrong to treat him differently: he too had participated by providing a statement to be read out and would have attended had he not been abroad.

Speaking from Wanshousi police station in Haidian district late on Tuesday, he told the Guardian that he was somewhat concerned about what would happen to him.

“If it is certain that I will not be released and will be arrested, there is nothing to worry about. I am nervous about the uncertainty,” he said.

Police summoned him by telephone at around 2pm in response to his statement, added the novelist, who is well known for his outspoken comments on modern Chinese society. [Source]

At the New York Times, Edward Wong reports that Murong was released from police custody on Wednesday morning, and provides further background on his detention:

Around 6 p.m. Tuesday, Mr. Murong posted on Twitter, “At the Wanshou Temple police station, waiting for the police to come find me to have tea.” Many Chinese friends anxiously discussed the detention online, and early Wednesday, Mr. Murong posted, “I’ve already safely returned home, thank you concerned friends.” He did not immediately give details of what happened during the detention.

Mr. Murong, 40, whose real name is Hao Qun, returned to his home in Beijing last week from a trip abroad and had expected to be approached by the police. While outside the country, he announced on the Internet that he would turn himself over to the Beijing police when he returned because they had detained several of his friends for gathering at an apartment on May 3 to commemorate the 1989 Tiananmen Square pro-democracy protests. Those protests ended when party leaders ordered a military crackdown in which at least hundreds of civilians were killed. The 25th anniversary of the crackdown took place on June 3 and 4 this year. […] [Source]