No Regrets For Choice of Independence Over Marriage 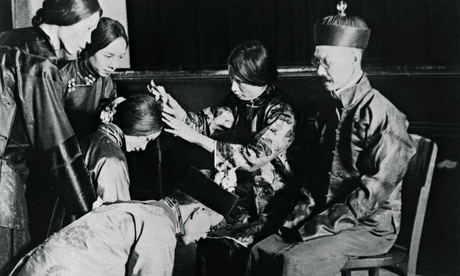 From The Guardian’s Tania Branigan:

At 85, Liang is a rare survivor of a custom stretching back to the early 19th century in parts of southern Guangdong. Women here could vow to remain a “self-combed woman”, or zishunü, leaving their parents’ home to work without marrying. “If I hadn’t become a ‘self-combed woman’, the landlord would have forced me into marriage,” she said.

Pretty girls were often forcibly taken as wives or concubines. It happened to two of her friends, and they killed themselves.

Becoming a zishunü gave women an unusual degree of independence in a world that allowed them little education, voice or freedom. But it came at a heavy price. They toiled in factories or other people’s homes to support their families. Women who broke their pledge of celibacy were supposed to kill themselves, though by Liang’s era, such expectations had largely disappeared.

The words recited with the eight strokes of the comb hint at the uneven path ahead: “First comb for luck, second for longevity, third for contentment, fourth for safety. Fifth for freedom …” [Source]