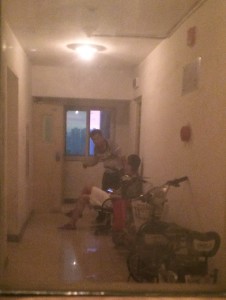 Tibetan writer Tsering Woeser reports that she and her husband Wang Lixiong have once again been placed under house arrest. This time, the restrictions seem aimed at averting a meeting between Woeser and visiting U.S. secretary of state, John Kerry. High Peaks Pure Earth has posted a translation of Woeser’s Facebook post about the house arrest (translated by Elliot Sperling, a Tibet scholar who was this week denied entry to China):

Wang Lixiong and I arrived in Beijing from Inner Mongolia and got to our door at around 6:00 in the evening. At 7:00 State Security arrived. They said they would be taking up their posts for the next two days and that we were forbidden to go out. I asked for the reason and they said that it was confidential. But I know that it’s because the day before yesterday an American Embassy official had called me on my mobile phone and invited me this evening to the embassy residence. […]

The photo shows State Security and students whom State Security had sent over from the Public Security University taking up posts at the elevator by our door. Wang Lixiong asked the Public Security University students if they knew that what they were doing was illegal. A student gave a very funny answer: “I have the right to not answer your question.” It was as if he were being questioned at trial. [Source]

She added that she would have liked to thank Kerry for the State Department “International Women of Courage” award she received last year. Due to travel restrictions, she was unable to accept the award in person. The department hailed Woeser as “the most prominent Mainland activist speaking out publicly about human rights conditions for China’s Tibetan citizens.”

See more on Woeser, including a February profile by PRI’s The World, via CDT.

Updated at 0:51, July 10th PST: Woeser tweets that the house arrest has ended:

The plain-clothed guards at our door have gone. This house arrest is over. It’s quite clear that it was meant to stop me attending the dinner I’d been invited to at the U.S. Embassy. Just as the BBC reported, U.S. State Department spokeswoman Jen Psaki said the U.S. side had asked me and another winner of a State Department International Women of Courage award, lawyer Guo Jianmei, to attend a private dinner meeting on women’s issues.

Guo, the State Department noted when it gave her the award in 2011, “enjoyed a fast-track career as a government legal professional,” but “left her comfortable world to become an advocate for those excluded from access to law in China, founding the Women’s Law Center at Peking University.” She recently represented Li Yan, whose death sentence for the killing of her abusive husband was overturned last month. It is unclear whether she was able to attend the embassy dinner.