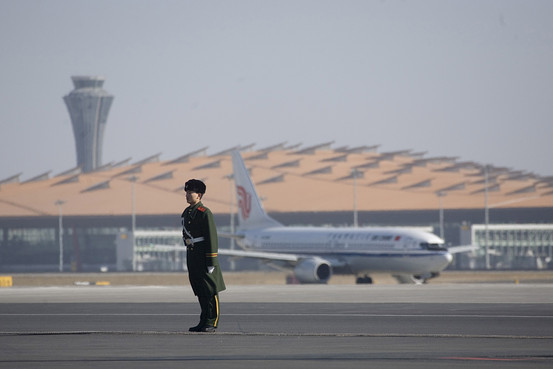 The Associated Press reports that China’s military has successfully conducted a missile test on Wednesday. Washington believes that the Chinese missile has the capacity to destroy satellites. From the Sun Herald:

The U.S. says China has tested a missile designed to destroy satellites and is urging Beijing to refrain from destabilizing actions.

State Department spokeswoman Marie Harf said the “non-destructive” test occurred Wednesday. She said a previous destructive test of the system in 2007 created thousands of pieces of dangerous debris in space.

Harf said Friday that the continued development and testing of destructive anti-satellite systems threaten the long-term security and sustainability of the outer-space environment that all nations depend upon. [Source]

According to state-run media, the latest Chinese missile test was the third such tests in the past four years. Ting Shi at Bloomberg reports that the recent success indicates advances in China’s missile-defense capabilities.

[…] “The anti-satellite and missile defense technologies have steadily improved and can now manage to intercept missiles in flight,” according to Yue Gang, a retired colonel in the People’s Liberation Army’s from General Staff Department. “But there haven’t been operational military deployment yet.”

The fact that the army has held three successful tests indicates the China’s missile program is entering “a new stage,” Yue said. [Source]

The Chinese government has issued a censorship instruction encouraging media to promote the success of the anti-missile test.

Elsewhere, the People’s Liberation Army is conducting several other military exercises that will require twelve domestic airports to delay one-quarter of their daily flights through the middle of August. Dexter Roberts at Bloomberg reports:

Those who fly China’s not-so-friendly skies are about to spend even more time grounded. “Passengers in east and central China will face mass flight delays until Aug. 15, the China Daily reported on July 22. At least the cause and culprit seem clearer this time: “Twelve airports were ordered to reduce scheduled flights by 25 percent due to large-scale People’s Liberation Army drills.”

China’s official English language paper cited as its source a report by news.cnr.cn, the website of China National Radio. National radio reporters, in turn, spoke to China’s civil aviation authority, which confirmed that delays are expected at Hongqiao and Pudong airports in Shanghai, as well as in major cities nearby, including Nanjing, Hangzhou, Hefei, Wuxi, Jinan, and Qingdao. Without mentioning the military directly, the authorities explained that the delays will be due to the “influence of high-frequency exercises by other users.”

The advance warning hasn’t appeased China’s long-suffering air commuters. “Under the guise of national security, they are putting their own interests above the national interest,” wrote one person on Sina Weibo (SINA) on Tuesday. “In fact, this also reflects the position of the people in the eyes of the army and the government. This happens because they not respect the people’s interests,” wrote an additional commenter earlier today, on the same site. [Source]

At South China Morning Post, Sijia Jiang looks at the potential impact that the air traffic restrictions will have on airfares and airline profits in China:

Aviation industry experts believe airfare rises of as much as 10 per cent could be needed to compensate for the lost income, a sufficiently large bite to trigger disclosure statements to stock exchanges.

[…] A reduction of 25 per cent in flights to eastern China for three weeks in the busy summer holiday season would erode airlines’ revenues, Lau said.

[…] The Big Three state-owned airlines – Air China, China Southern Airlines and China Eastern Airlines – have all issued profit warnings before their interim results due next month.

Patrick Xu, an analyst at Barclays, estimated that a 10 per cent increase in ticket prices would be needed to compensate for the reduction in flights. “We expect the overall earnings impact to be neutral, as an increase in yield will offset, at least partially, the capacity cut,” he said. [Source]