On Asia Tour, Pope Francis Reaches Out to China 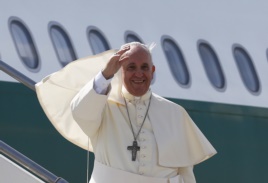 The Vatican and Beijing have been on uneasy terms since the Communist Party came to power in 1949. Upon Pope Francis I’s ascension last year, Beijing warned him against interfering with China’s internal affairs. Ahead of the Pope’s trip to Asia this week—first papal tour of the region in 15 years—the Wall Street Journal reported on how and why Pope Francis might use his trip to repair strained relations with Beijing:

Today, China has an estimated 12 million Catholics, many of whom practice in underground churches beyond Beijing’s direct control. But around 5.3 million are represented by the 70 bishops appointed by the CPA. Catholics enjoy greater freedom than in the past, though Beijing remains wary that the church could fuel political dissent. Authorities launch periodic crackdowns involving church demolitions, beatings and imprisonment of worshipers or priests at underground churches.

The Holy See has long been anxious to settle relations in China. In a conciliatory, 55-page open letter to Chinese Catholics in 2007, Pope Benedict XVI emphasized that the church had no political ambitions. […] [Source]

To begin the tour, Pope Francis flew to South Korea on Thursday, and Beijing allowed his jet to enter Chinese airspace while en route—the first time since 1989, when a request was refused. In returning what might be seen as an olive branch, Pope Francis offered his blessing to China in a telegram to Xi Jinping: “I extend my best wishes to your excellency and your fellow citizens, and I invoke divine blessings of peace and well-being upon the nation.” While the Pope commonly offers blessings to those he flies over, The Wall Street Journal explains the significance of his telegram to President Xi:

[…T]he case of China is a special one. The last time a pope traveled to East Asia, when St. John Paul II flew to the Philippines in 1995, Chinese authorities denied permission to fly over their territory, forcing the papal plane into a long detour.

This time, Beijing allowed Pope Francis to fly over China. The gesture is significant, particularly in light of the especially poor state of relations, which have hit a low in recent years after Chinese authorities placed a Catholic bishop under house arrest.

The Vatican has long been anxious to repair relations with Beijing. In its quest to spread the faith in Asia, where Catholicism today represents a tiny slice of the population, China is the big kahuna. Its huge population and the spiritual vacuum left by eroding Communist ideology are a dream for Vatican evangelists.

As a result, the dog-whistle message sent from the papal plane will surely perk up the antennae of Vatican- and China-watchers alike. [Source]

The Washington Post has more on fraught relations between Beijing and the Vatican, and on Chinese state media’s guarded praise of the interaction:

The fight between two of the world’s most hierarchical and authority-driven powers has become so fraught that, according to the Vatican, Chinese authorities have in some cases kidnapped bishops approved by Rome and pressured them into laying hands upon government-chosen bishops at their ordinations — a move meant to lend such ceremonies legitimacy despite Vatican opposition.

The Vatican also maintains diplomatic relations with Taiwan, a source of anger for Beijing.

For those reasons, papal travels through the region — which in the West frequently draw huge headlines — have often been largely ignored in the Chinese news media.

The often-nationalistic Global Times called it a “positive development in China-Vatican relations,” but the newspaper cautioned that it would take much time for the two to establish formal diplomatic relations. […] [Source]

While China’s Foreign Ministry has declared a willingness towards thawing relations, Retuers reports that some Chinese were barred from entering South Korea to attend an event in honor of the Pope’s visit:

About half of more than 100 Chinese who had planned to attend an Asian Youth Day event during the pope’s visit are unable to attend due to “a complicated situation inside China”, Heo Young-yeop, spokesman for the Committee for the Papal Visit to Korea, told reporters.

He declined to give further details, citing their safety. Another organizer, who declined to be identified, said some of the would-be attendees had been arrested by Chinese authorities.

[…] China’s Foreign Ministry said it had “noted” the Pope’s position, and repeated its position that Beijing was sincere about wanting to improve relations with the Vatican.

We are willing to keep working hard with the Vatican to carry out constructive dialogue and push for the improvement of bilateral ties,” the ministry said in a statement faxed to Reuters, but did not address the issue of Chinese barred from attending the youth event. [Source]

The Pope’s Asia trip comes after Beijing announced a plan to construct a Christianity “compatible with the country’s path of socialism” after being accused of cracking down on the religion by demolishing churches and removing crosses in regions with a sizable Christian population. A report from the Voice of America describes how the Pope’s visit to Asia puts a focus on the growing popularity of Christianity in China:

Lately the pace of growth has been breathtaking. The number of Christians has more than tripled since 1996 when it was estimated at 10 million. Pew Research Center puts the current population at twice that, at 60 million. And one expert, Purdue University professor Fenggang Yang, even goes so far as to predict that by 2030 China will be the largest Christian country in the world.

[…] Author and dissident Yu Jie converted around a decade ago before coming to the U.S. He traces Christianity’s rise to the bloody suppression of the democracy movement in Tiananmen Square in 1989.

[…] Increasing urbanization has uprooted Chinese from rural traditions while civil society is lacking in the cities, Yu said.

“Chinese people are not allowed to choose their political leader,” he said. “But they are able to select their pastors and elders in more and more churches.” [Source]

Beijing is cautious of any popular religious movement that could challenge central rule, an often regulates the practice of religion among politically sensitive ethnic minorities. For more on religion in China, see prior CDT coverage.