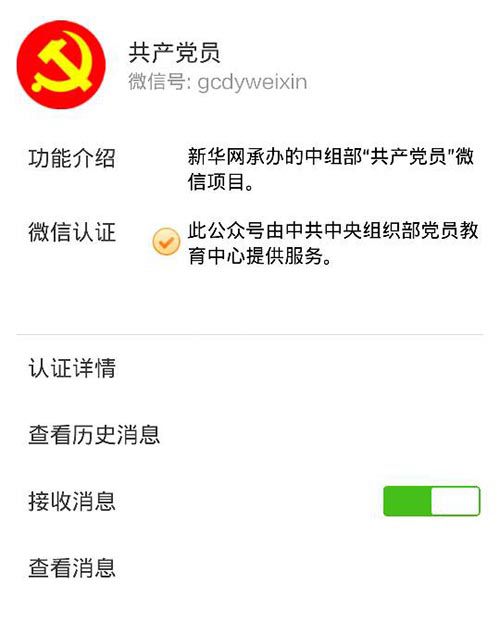 The Chinese Communist Party (CCP) Central Organization Department has launched public, official “CCP Members” (共产党员) accounts on WeChat and another mobile messaging app created by NetEase, Yixin [Chinese]. The accounts will be updated daily with a “focus on important steps in party building and organization” as well as “hot topics.” The launch comes in the midst of increasing restrictions on social media in China, including a real name registration requirement on WeChat.

In late August, an internal document of the Organization Department of the party’s central committee — a key organ that serves as the human resources arm of this party apparatus to manage member intake, assignment, and personnel issues–surfaced on Chinese social media. Dated July 24, the document “urges the vast number of party member to subscribe to the official public accounts called ‘Communist Party Members’ on WeChat and Yixin,” two of China’s most popular mobile messaging apps with hundreds of millions of users between them. Chinese organizations, companies, and many independent “self-media” groups use so-called public accounts on these apps to push out articles and contents to users that choose to subscribe to them.

The goal of establishing these two accounts, according to the document, was in part to “open up a new front in party member education.” Perhaps mindful of the fact that many party members are not tech-savvy, the document orders local departments to “hold meetings and seminars” to teach members how to use the accounts. [Source]

That document can be viewed in full on CDT Chinese.

Lu also points out the eclectic coverage on the accounts, from banal party propaganda to more lively stories, like “Sending Mooncakes, Planning Wedding Banquets, Giving Out Money–Where Is the Red Line?” and “Don’t Let Life Go by Like Instant Coffee.”

It’s hard to tell how much buzz these accounts are getting, since the handles for both accounts are blocked from Weibo search results:

While these two accounts take a light-hearted approach to state media, they come in the stead of other “self-media” WeChat accounts wiped out. In May, dozens of popular accounts were shut down for allegedly spreading “negative or illegal harmful information to the public.” Meanwhile, organization departments at every level of government are being called on to promote the CCP Members accounts [Chinese].