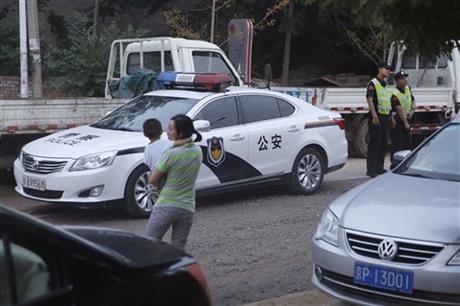 Authorities in China have shut down the 11th Beijing Independent Film Festival on its opening day. While the film festival experienced disruptions in previous years, organizers were able to reach deals with the police that allowed the films to be played. This year, however, there was no such accommodation. AP reports:

Chinese authorities blocked an annual independent film festival from opening Saturday, seizing documents and films from organizers and hauling away two event officials in a sign that Beijing is stepping up its already tight ideological controls.

Li Xianting, a film critic and founder of the Li Xianting Film Fund, the organizer of the Beijing Independent Film Festival, said police searched his office and confiscated materials he had gathered over more than 10 years. Li and the festival’s artistic director, Wang Hongwei, were detained by police Saturday night but later released, according to their supporters.

The festival, which began in 2006, has seen severe police obstruction over the past few years, but this year’s crackdown is far more serious, Wang said.

“In the past few years, when they forced us to cancel the festival, we just moved it to other places, or delayed the screenings,” he said. “But this year, we cannot carry on with the festival. It is completely forbidden.” [Source]

Helene Franchineau, a video journalist for the Associated Press in Beijing, posted about the closure on Twitter and Instagram:

The @AP Beijing team covering the shutdown of the Beijing Independent Film Festival got roughed up. Camera broken 🙁 pic.twitter.com/HvttAvfX6V

There will be no Beijing Independent Film Festival this year. The police and the two dozens of thugs guarding the entrance of the festival, due to be held in Songzhuang starting today, made sure of that. The thugs threatened anyone who came close, preventing us from filming or taking pictures. They broke my video camera, threw water at reporters, threatened us for filming, grabbed cell phones and yelled at everyone. This is the poster of the film festival (停 means “to stop,” ironically) and on the right the two police officers who demanded our passport number and filmed us. Welcome to 2014 China. [Source]

Julie Makinen at the LA Times also reported that police and a number of unidentified men guarded the entrance to the festival, threatening anyone caught filming or taking pictures.

On Saturday, dozens of men blocked directors and audience members from entering the screening venue, a small film center down a dusty narrow road lined with artists’ workshops and galleries. A notice was affixed to the door, reading: “Announcement. The festival is hereby called off.” It was signed by the Xiaopu Village Committee.

On Sunday, at least six men were stationed at the door to the Li Xianting Film Fund, where the festival was to be held. Eleven films and multiple Q&A sessions scheduled for the day were called off. Asked why the event had been canceled, one of the men blocking the entrance said: “There is no why. Now leave.”

Asked if the festival — which was scheduled to run through Aug. 31 — might resume Monday, he said no, and ordered two visitors not to take photos of the building or the notice on the door. [Source]

Film director Huang Wenhai called the shutdown of this year’s film festival “the darkest day in the history of Chinese independent film,” according to David Bandurski at China Media Project:

The history to which Huang refers doesn’t go back much further than a decade, but this most recent crackdown may suggest authorities are no longer willing to tolerate the emergence of independent film voices (and the social networks growing around them) — even if they are already effectively marginalized.

In recent years, the Beijing Independent Film Festival has been one of a small number of forums inside China where indie filmmakers — understood in this context primarily as directors working outside the state-approved “mainstream” film culture of the Chinese Communist Party — have been able to share and discuss their work. And though this and other festivals (or “forums,” as they are sometimes more delicately called) have met with trouble consistently since around 2010, they have not to date been targeted so completely or aggressively. [Source]

See more on ‘The Best and Worst of Times for China’s Film Industry‘, via CDT.