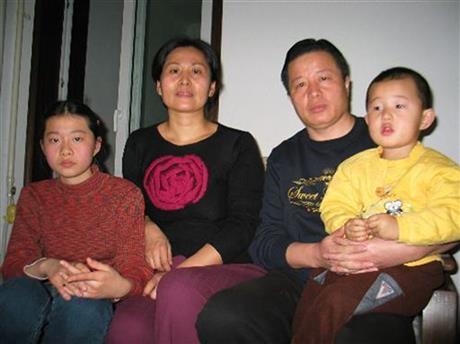 AP’s Gillian Wong reports on the scheduled release of rights lawyer Gao Zhisheng from prison on Thursday, and concerns that his freedom will continue to be limited.

“Gao was a great and respected lawyer who, by defending the rights of many people and causes, courageously sought to give meaning to official claims to be establishing a ‘rule of law’ in China,” said Jerome Cohen, a Chinese law expert at New York University. “His huge number of supporters inside and outside China will be eager to learn his fate.”

[…] “We fear that he would step out of the small door of the prison only to enter a larger prison in the hands of the state security, not only barred from returning to Beijing but also prevented from seeing his family and friends,” said Chinese rights lawyer Tang Jitian. “This would show that the authorities have a problem with rectifying their mistakes and winning the trust of the world.” [Source]

The Telegraph’s Malcolm Moore describes the heavy toll that Gao’s repeated imprisonment has taken on his family—which in 2010 led him to [announce that he would give up rights work](in 2010)—and details his legal career and subsequent mistreatment:

Mr Gao, who was born into poverty in the 1960s and grew up in a cave, first joined the People’s Liberation Army and then ran a vegetable stand. After seeing in a newspaper article that China was short of lawyers, he taught himself enough to pass the national bar exam in 1995 and founded his own firm in Beijing.

[…] His troubles began at the end of 2005, when he wrote an open letter renouncing his membership of the Communist party and detailing the sexual abuse and torture of several of his clients, members of the banned Falun Gong movement, in detention centres.

Almost immediately he was stripped of his licence to practice law and put under surveillance by secret police. The following year, he was nearly run over by one of the cars that often tailed him. In August 2006, he began disappearing into custody for regular rounds of beating and torture. [Source]

See more at Human Rights Watch. Yaxue Cao posted a reflection on Gao’s case at China Change, including lengthy excerpts from Gao’s own account of his “more than 50 days of torture in 2007.” As she notes, hopes for Gao’s release have been frustrated before:

Entering late fall of 2011, the name of Gao Zhisheng appeared more and more frequently on my Twitter timeline. Entering December, the wait for Gao Zhisheng had become anxious. Among the daily news about arrests, torture, labor camps, and political prisoners, the fate of Gao Zhisheng was the most heart wrenching. Five years ago on December 21, 2006, Beijing First Intermediary People’s Court convicted Gao Zhisheng of “inciting to subvert state power” and sentenced him to three years in prison with a five-year probation and deprivation of political rights for one year. But for much of the five years, Gao Zhisheng had been “missing” and subjected to horrendous torture as we learned from his account. On December 20 of that year, he would have served the probation and was due to be free. People hoped to see him emerging before the world, alive and free at last.