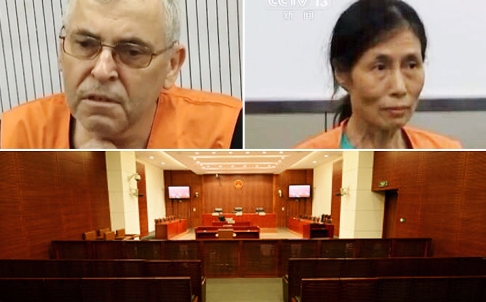 British and Chinese-American corporate investigators Peter Humphrey and Yu Yingzeng were found guilty of illegally obtaining private information on Friday. They received sentences of two and a half and two years in prison respectively, as well as fines totaling 350,000 yuan (about $57,000) and deportation for Humphrey. From David Barboza at The New York Times:

In a highly anticipated one-day trial, the investigator, Peter Humphrey, and his wife, Yu Yingzeng, admitted that they regularly bought confidential government records to help them research corporate fraud for their risk management consulting firm, according to a transcript of the court hearing. Their actions were usually taken on contract for foreign or multinational companies.

The couple’s arrest last year stunned the international community, and has had a chilling effect on companies that engage in due diligence work for global companies, many of whom believe the couple may have been unfairly targeted. The companies sell services considered essential to doing business in China, like background checks. But because public records are limited and corruption is rampant, it can be a difficult business. [Source]

Patrick Boehler’s liveblog of the trial at South China Morning Post provides details of the proceedings and testimony:

10.10pm: In his closing statement, Humphrey talks about his childhood fascination and respect for China. Growing up in a poor family, he saw the China in 1979 and wanted to be a part of its development. He says he has always supported anti-corruption in China, and many of his projects dealt with helping different companies detect internal corruption and fraud. He and his wife wanted to give back to the Chinese community but failed due to their lack of understanding on the 2009 criminal law reform on privacy. Humphrey apologises for disobeying the law and expresses regret. “My wife and I still love and respect China passionately.” He hopes the court will accept their apology.

10.20pm: In her short closing statement, Yu expresses regret over their crimes and begs the court to forgive her husband. [Source]

Read more on the case and the GlaxoSmithKline investigation with which it was entangled via CDT.