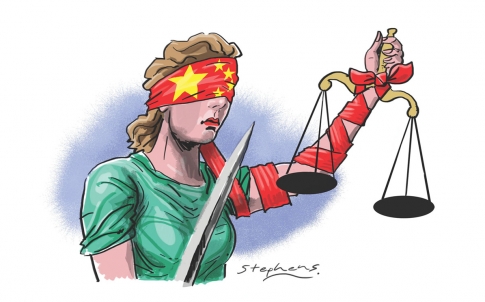 Party leaders and their legal advisers have been struggling with the problem of how to achieve the rule of law for many years. Now, they claim, the fourth plenum will “provide a road map” that will “flesh out” the goals set forth in the decision so that, as the former director of research at the Supreme People’s Court recently stated, “you can both ‘see and feel’ the rule of law”.

[…] Many people inside and outside China, however, understand the Zhou case as an immediate, living refutation of the rule of law principles that the party is currently touting to the country and the world. If indeed there is now “equal justice”, they ask, why is it that many other leaders suspected of corrupt relations are also not being subjected to confinement and investigation in accordance with the party’s frightening shuanggui procedures? How can those disciplinary inspection procedures – the customary prerequisite to criminal prosecution of party members – possibly be consistent with the constitution and the Criminal Procedure Law? [As Donald Clarke has noted, shuanggui has no legal foundation—perhaps deliberately.]

[…] Of course, it must be said that these are extraordinary political cases and cannot be taken as representative of the normal administration of justice. But if violations of China’s constitution and the laws take place in such prominent cases, we can imagine the extent of violations in less visible ones. [Source]

Read more on the Zhou case’s implications for rule of law and on judicial reforms unveiled ahead of the plenum via CDT.